You Can Now Send Your Enemies A Vaginal Cleansing Kit Anonymously

Oh, the internet. Never has it been so easy to let your enemies know how much you hate them. Anonymously, obvs.

You can bomb them with glitter, send them a box of poo, tell them to eat a bag of dicks and now? You can send them a vagina cleaning kit.

Through the delightfully named site WashYourBox.com, you can deliver the coldest insult possible to womankind: your vaginal region stinks.

For $14.99, the recipient receives a bottle of 'Moist' moisturising cream soap, a loofah, an offensive anonymous note of your choice, and a printed screengrab of the "you smell bad and you should feel bad" bit from Futurama. Nice. 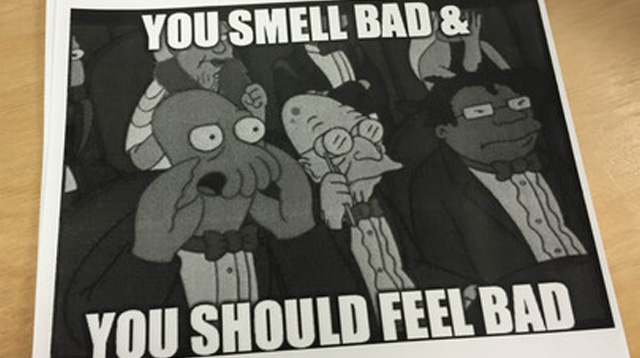 On the site, the evil mastermind behind the bitchiest thing we've ever seen explains the reasoning behind it all.

Imagine a woman receives this package. At first she's offended someone out there thinks her vag smells. She's conflicted. She wants to fix this problem but doesn't want to shell out cash to buy some clensing product.

She'll end up using a product called Moist sent by some asshole because the fear of having a vag that smells like a dead bear covered in mayonnaise is too much. You've just made that woman your bitch.

Isn't the world a lovely place?