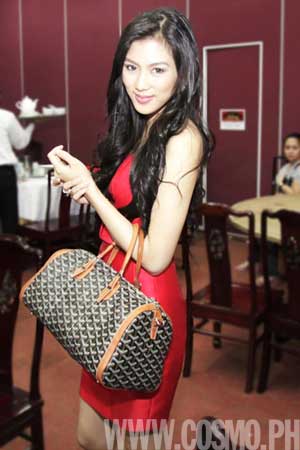 TV5 princess Alex Gonzaga is happy with the new bag she brought for herself.

Alex Gonzaga said she fell in love with the Goyard Crosiere handbag she was toting at a press event when she first saw some of her friends carrying one. But since she thinks the bag is not very popular here in the Philippines, she asked one her friends whose business was selling bags to get one for her in Paris. She found the right time to splurge a little bit last January 16, when she bought the signature bag as a birthday gift for herself.

It’s a her reward to herself for all her hard work, as she’s busy with a new television drama at the Kapatid network. She’ll be starring in the television remake of Ang Babaeng Hampaslupa with Alice Dixson and Susan Roces. Plus, even with her thriving showbiz career, Alex still finds time to attend school. She hopes to finish her degree in Education at the University of Asia and the Pacific (UA&P) this year.

Alex gushes about the bag, saying that she likes it so much. “Ang maganda dito is you can put anything. Ang gusto ko din sa bag is it can stand on its own. Ayoko ng bag na lousy kapag binaba mo. Pwede siyang naka-stand lang na ganyan at pwede mong kunin kaagad 'yung gusto mo.”

Surprisingly, she doesn’t bring any makeup in this bag, except for her lip stain. All her makeup is in another bag, which stays in her car. She tries to avoid wearing makeup when she's not in front of the camera.

So, without makeup, what could we find in Alex Gonzaga's Goyard handbag? Launch the gallery to find out.