In accordance with the award show rule book, Gigi Hadid went through several dress changes while hosting the American Music Awards on Sunday (as did her co-host, comedian Jay Pharoah).

Last year's AMAs host Jennifer Lopez went through 15 outfits during the broadcast, and she had some advice for first-time host Gigi. "We did our research and J.Lo's team told us to do less changes," Gigi said on the pre-show red carpet. "I'm going with about half, but they're great looks and they're going to get a good amount of time."

Half of 15 actually turned out to be five, but who's counting? Here's everything Gigi wore at the AMAs:

Gigi hit the red carpet in an off-the-shoulder lace dress that had sleeves so long they covered her fingers. It hit on the trend, led by Beyoncé, of wearing bridal when it isn't your wedding. 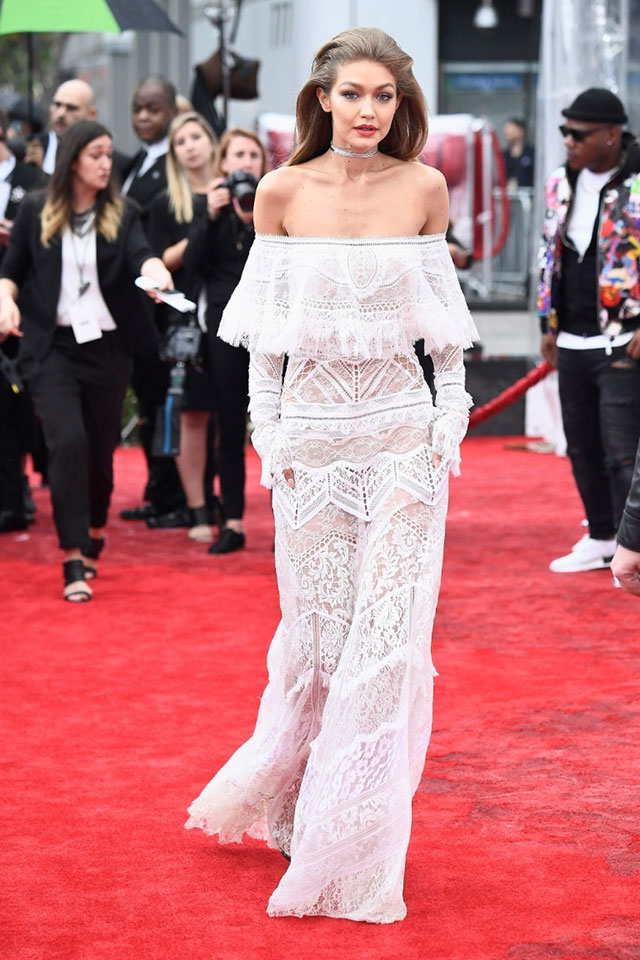 Gigi unexpectedly busted out a "Melania" impersonation at the start of the show, and she did it wearing a custom one-shoulder dress from Atelier Versace. Zayn Malik, who won the award for Best New Artist of the Year, attended the show wearing Versace as well. 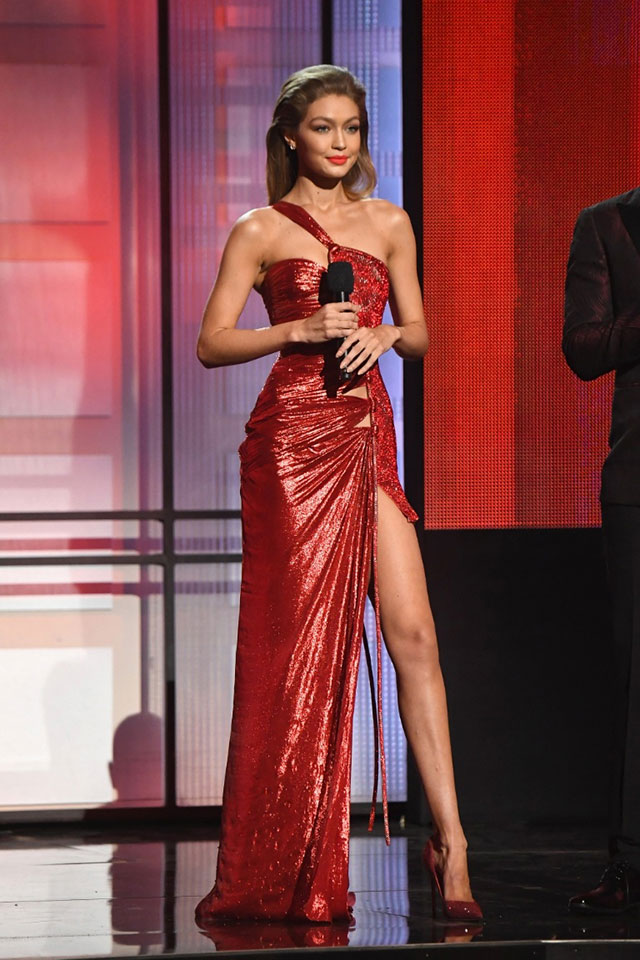 This blazer-shorts combo had lots of bedazzling and metallic fringe. Fun fact: Hailey Baldwin modeled this look on the runway during Julien MacDonald's spring 2017 show. 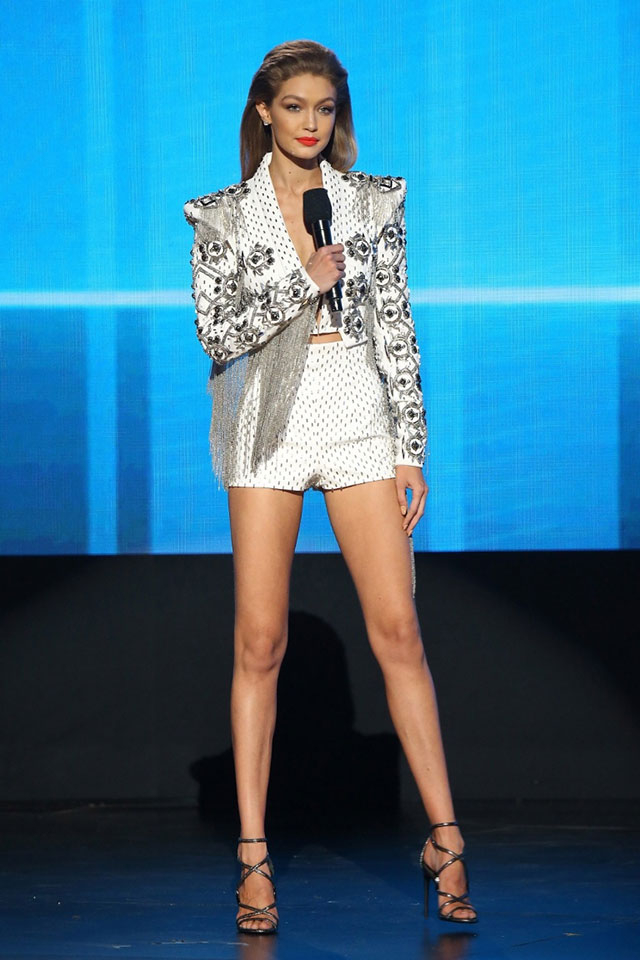 When she hugged and kissed Zayn after he won Best New Artist of the Year, Gigi was wearing this modified version of a dress from Julien MacDonald's spring 2017 collection. The leather dress had side cutouts, a turtleneck, and a plunging illusion panel. 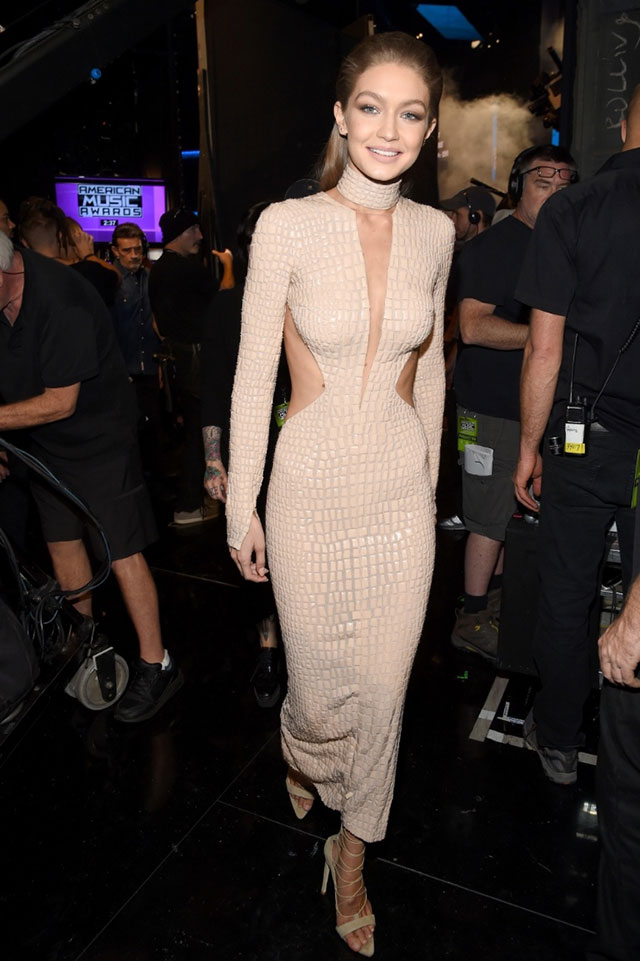 Gigi wore a body chain or long necklace with this quilted black dress that had a high turtleneck, long sleeves, a deep keyhole cutout, and a high center slit in the skirt. 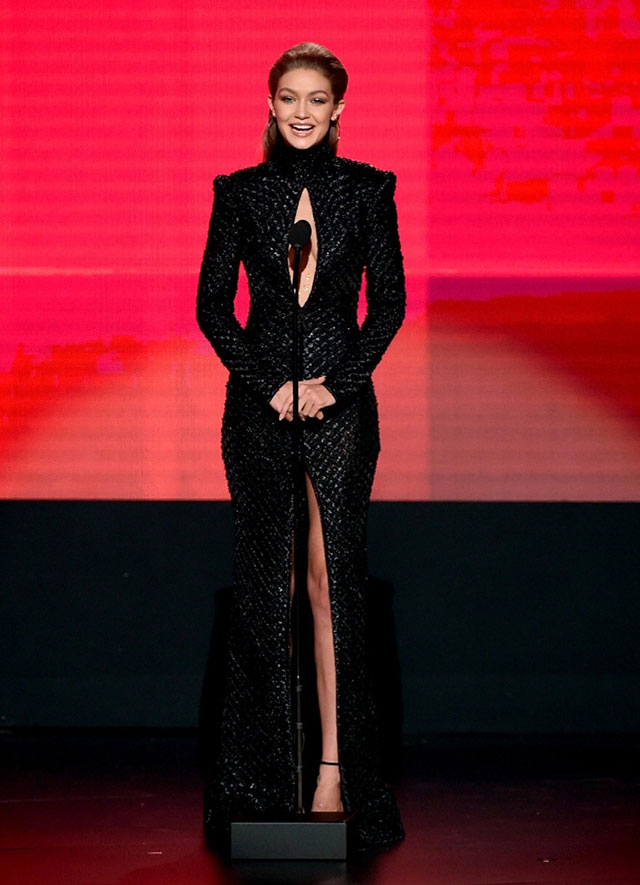 For her final look, Gigi wore a sheer, sparkly jumpsuit custom-made for her by Atelier Versace that had some athletic-wear details, like an elastic drawstring waistband. 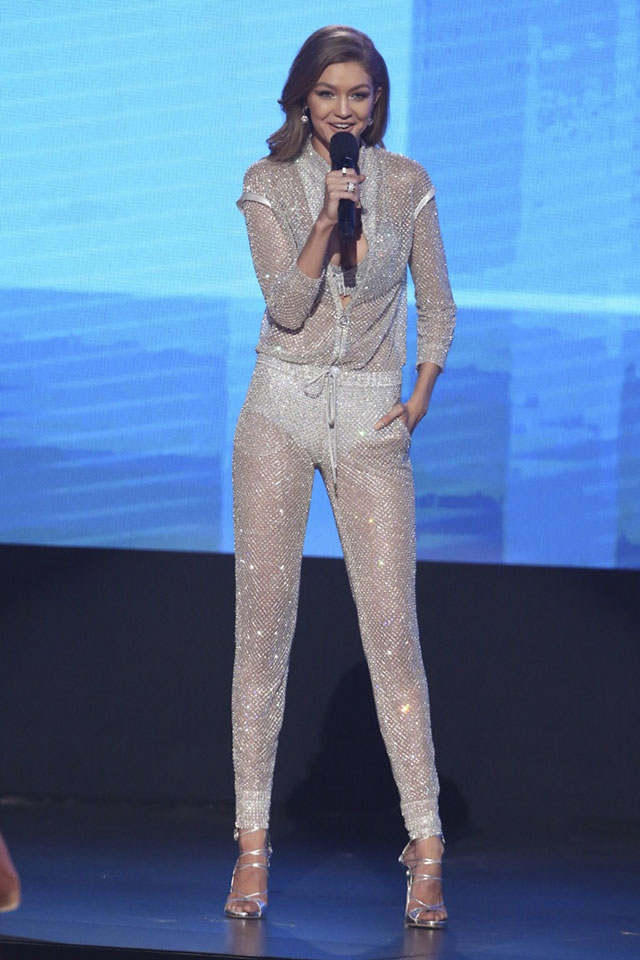 Gigi looked comfortable the day before the show in this luxe yet lounge-y outfit by Juan Carlos Obando. Now that the show's over, she can go back to relaxing!

Last minute selfies with @gigihadid before she hits the stage to host the #AMAs tonight. ??? Thanks for coming, @subwaydoodle! pic.twitter.com/9BvBM82Fwk