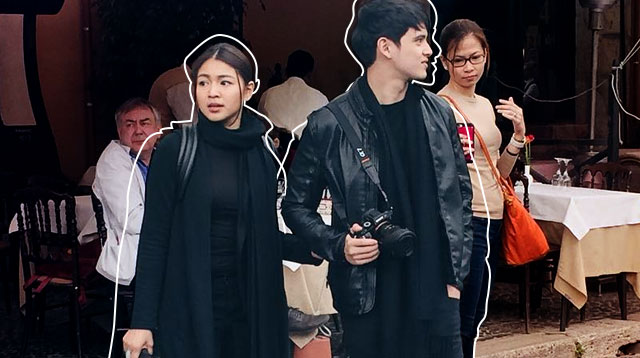 Can we please talk about how stylishly on point Nadine Lustre and James Reid were while in Europe? The real-life couple took London, Paris, Milan, and Rome by storm, showing up in chic combinations that—surprise, surprise—were mirrors of each other. So strong was their #CoupleOutfit game that fans penned the nickname Team Black in honor of JaDine’s predominantly black ensembles.

Neutrals are so perfect for traveling! While exploring Paris on their days off, James and Nadine kept cozy in light-colored outerwear—a camel coat for him and a classic trench for her.

We’re IN LOVE with Nadz’s OOTD, which features a bodycon midi dress, a super trendy choker band, and buckled boots.

Hats are essential in chilly Europe! James kept it cool and casual in a baseball cap, while Nadine donned a wide-brim hat.

The couple relied on a fair amount of black tops, skinny jeans, and comfy boots to get them through their trip.

What’s Italy without some gelato? The two indulged in the sweet treat in head-to-toe black (and with enough camera equipment to put our Instagram feeds to shame).

Heavy black coats apparently aren’t enough to keep these two warm—they just had to cuddle. Ugh you guys, so sweet!