'Not Becky' Pins Exist And Rita Ora Just Wore One 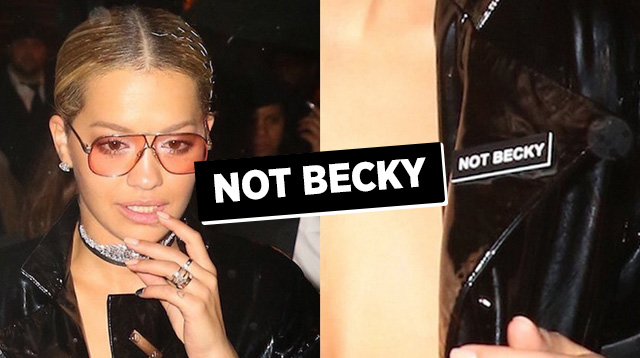 Unless you’ve been living under a rock, you’re probably aware of the whole Jay-Z/Beyonce cheating scandal that blew up after Queen Bey released her new album Lemonade—which included a whole lot of songs that alluded to Jay-Z’s infidelity. One of the tracks (“Sorry”) in particular referenced “Becky with the good hair” and this naturally got people talking. Who is Becky?!

Rita Ora got swept into the drama after she (foolishly, we might add) posted a photo of herself wearing a lemon bra and a necklace with what looked like a “J” pendant. Yeah, well, girl probably got sick of the accusations and the bashing, because she’s been pretty obvious about wanting to clear her name. First, she took a selfie with Beyonce at Monday’s Met Gala.

THEN, she turned up to a Met Gala after-party in a cleavage-baring patent leather outfit and rose gold sunnies. But that’s not the most glaring detail, because proudly pinned on Rita’s chest was a small black badge emblazoned with “Not Becky.” Hmmm. The lady doth protest too much, dontchathink?

Katy Perry also got in on the action—though not for once did we suspect her of being Becky.

Something tells us an enterprising millennial will soon capitalize on the whole thing and actually start selling Not Becky merchandise. Hey, if it’s what the masses want, right?