The Best Boob Moments At The 2015 Golden Globe Awards

"These are my boobs. Aren't they perfect?" said everyone at the Golden Globes today.
by Sandra Pineda | Jan 12, 2015

ICYMI: The 2015 Golden Globe Awards just wrapped up in Beverly Hills on January 12—and we had so much fun stalking the celebrity styles on the red carpet. The night's biggest trend? Cleavage-baring, floor-length dresses—as if the girls were telling the world, "These are my boobs. Aren't they perfect?" Here, a few of our favorite boob moments:

Rosamund Pike
The Gone Girl star walked the red carpet in a white cut-out gown from Vera Wang. Uh, giirl, you just gave birth a month ago? ARE YOU EVEN FOR REAL?

Sienna Miller
Sienna rocked this navel-grazing dress from Miu Miu—making her every girl's new #fitspiration for 2015. 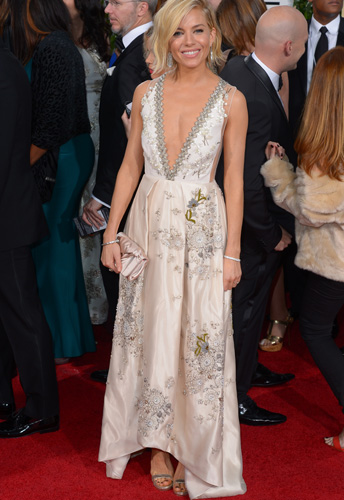 Kate Hudson
The actress showed off her bangin' body in this Versace gown with side cutouts. Never eating a cupcake. EVER.

Kate Beckinsale
How are you 41 years old, Kate? The British actress wore an Elie Saab dress which she accessorized with Lorraine Schwartz jewelry. Not sure which we want more: her perky boobs which defy gravity or her bling. #confused 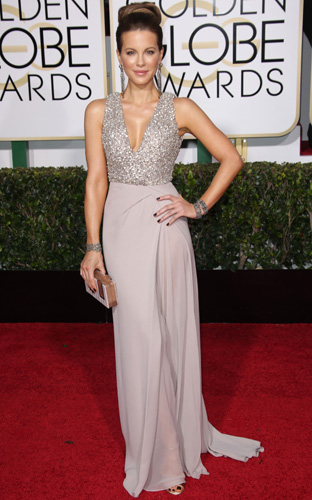 Jennifer Lopez
Ah, J. Lo. We don't know where to look. The 45-year-old singer was a stunner in this Zuhair Murad creation with a thigh-high slit and a ridiculously low front.

Her boobs were so perfect, even actor Jeremy Renner took notice when they both presented the award for Best Actor in a Miniseries or Motion Picture Made for Television. J.Lo opened the envelope and said, "I have the nails." To which Jeremy replied, "You've got the globes, too."