What Kontradiva Angel Aquino Brings With Her On The Set

The model, host, and actress who stars as Vera Cruz in Magkaribal shows Cosmo her taping essentials inside her black tote.
by Nherz Almo | Oct 5, 2010
Post a Comment
Featured 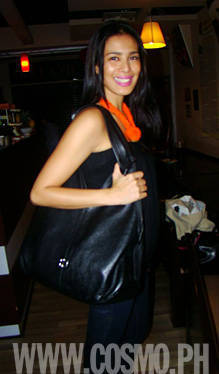 She may be the cruel adoptive mother of Erich Gonzales' character on Magkaribal, but Angel Aquino is the exact opposite of Vera Cruz in real life.

In fact, she tells Cosmo.ph, "It breaks my heart every time I have to be mean to Bea and Erich because they're such sweet girls. At saka, alam mo 'yon, they're so fragile, lalung-lalo na si Erich. 'Yung character ni Erich, being Chloe, parang, how can you be mean to someone who's so pure and who just wants to please you? Maski ako, e, nagagalit ako sa sarili ko. I have to be Vera. It breaks my heart, mahirap para sa akin."

Although her role on Magkaribal is a "kontradiva," the model-actress enjoys it.

Isn't she worried that her character would give the public a negative impression of her?

Angel thinks that Filipino viewers have become mature. She recalls, "I think I remember watching Agot [Isidro] as Ingrid. Pero I could see that people started to see her as Agot playing Ingrid and not as Ingrid herself. So, hindi sila nagagalit kay Agot. Siguro nagagalit sila kay Ingrid and somehow, actually, some people, somehow their hearts would go out to Ingrid. Ngayon, they've designed villainesses, or kontradivas ang tawag sa kanila, in such a way that they will be sympathetic also, that they will be as real as possible."

The Us Girls host admits that her being a fashion model might have helped her get a spot on this fashion TV series. "Maybe because I have been a model since the beginning, so inisip nila I would fit the part kasi iniisip nila fashionista," she explains.

But is she also like her co-star Gretchen Barretto, who brings her own clothes for her role as Victoria Valera?

Angel says she just wears whatever the production team gives her.

She adds, "Alam mo, talo-talo na talaga. Ang ibig kong sabihin, partida na, alam ko na she's the more fashionable one talaga. Hands up na talaga ako diyan. I don't even try to compete with the way she dresses kasi she has the means, she has the goods, she has personal stuff that she could use. E ako, wala naman akong gamit, 'di ba? So, whatever they make me wear, I wear it. Basta ang sa akin, as long as I played Vera very well, then I'll be happy."

This is actually the second time we're featuring a bag carried by Angel. The first one was a Furla tote that had very basic beauty essentials.

Click through to the Gallery below to check out what Angel carried in her black tote when we caught her at an Us Girls press event. (One of the items is a gift from Gretchen!)