Here's Everything You Need To Know About Bras

For whatever reason, buying a bra and figuring out your size is one of the most complicated processes ever. So I asked Ra'el Cohen, the chief creative officer of indie lingerie brand ThirdLove, everything you possibly need to know about these pretty little underthings. Scroll on for some knowledge.

How do you know if your bra doesn't fit correctly?

"Your bra is trying to talk to you—that's how I think of it," Cohen says. "At the end of the day, take special note of what's bugging you before you walk in the door and rip off your bra—which is typically what women do. Are you feeling the hook-and-eye closure in the back? Is it scratchy? Are you feeling the wire digging in? Where is that wire digging in—in the middle or on the sides? Has your strap been slipping all day? You know you're not comfortable, but sometimes we're so busy we don't take the time to figure out how or why."

What's a quick trick or hack to figure out what's wrong with my bra?

Cohen suggests taking what she calls the "T-shirt test." "Put on a tight white T-shirt, and if you can see the bra very clearly, whether it's the cup edge bulging or gaping, or the strap or the sides where it might be digging in, you're wearing the wrong size," she says.

Basically, a store attendant measures your rib cage and bust area with a measuring tape. That tells them your band and cup size. But that's not all.

"She's doing more than just measuring you. She's also looking at your body shape, your breast shape, and how far apart your breasts are," Cohen says. "She's also seeing what brand you're currently wearing and the size you think you are."

What? There are different breast shapes?

Apparently, there are seven major boob "types." Here they are: 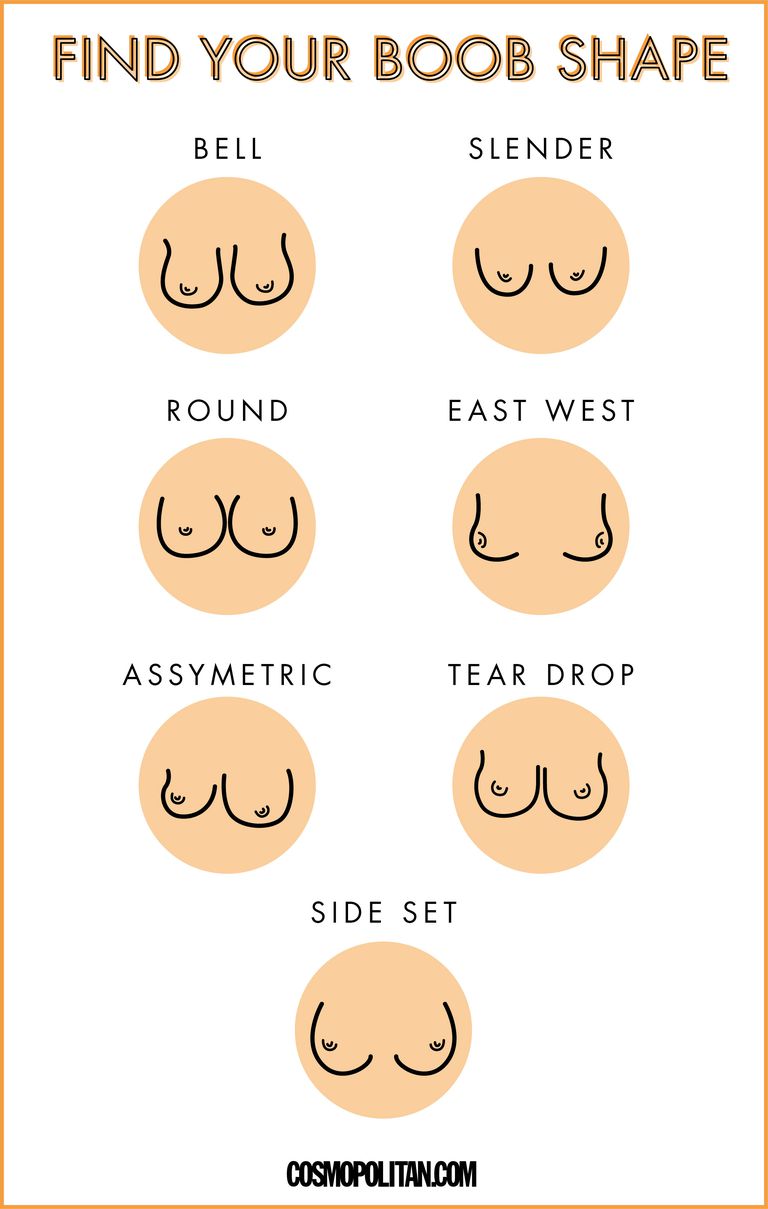 Does it matter which breast shape you have?

"People are always focused on the size of a bra—the band and cup—and that matters," Cohen says. "But breast shape and bra style are also incredibly important. For example, if you have east-west or side set breasts that point outwards or have ample space between them, it's very difficult for you to wear a full underwire around your whole breast." Cohen says women with those breast shapes should find a bra with a shorter wire, that stops underneath the breast, instead of encircling it.

Nope. There's a concept called ~sister sizing~ that nobody really understands. But here's the gist of it, using 34B as an example: A 34B is the same thing as a 32C, the 32C just has a shorter band. If you're going up a size, a 36A is also a B cup, it just has a longer band.

What if you need a cup size smaller than A?

"If you're an A and you go down, it goes double, triple, quadruple—all of those are smaller," Cohen says. "At the opposite side of the spectrum, there's a double D—that's bigger. It really is confusing."

What does it mean if your straps slip off your shoulders every time?

"One reason could be that you have narrow shoulders or sloped shoulders," Cohen says. "If that's the case, we'd recommend a bra like a plunge bra or a racerback bra, where the straps are further in to combat that. You can also just try adjusting the straps to see if that helps." According to Cohen, many women buy bras online and never adjust the straps to their own measurements when they put them on. That leads to a lot of slippage, too.

How many bras do I really need?

"You probably have, like, 20 bras in your drawer, including some from around 10 years ago. You don't need that many," Cohen says. "I recommend two to three neutral-toned T-shirt bras—whatever is closest to your skin tone. Those are your workhorses, you're going to wear those every day. Then, I recommend a black or colored T-shirt bra if you like that and want to have that variety. Then, a nude and black strapless set, and a nice lounge bra or bralette for comfy moments. That's seven bras total."

Can you wear the same bra every day?

Please don't do this! According to Cohen, the elastic stretches out as you wear it and needs 24 to 48 hours to shrink back to its original form. If you're wearing the same bra every day, after a few months, it's just going start to look shapeless or wonky. You don't want that.

How often do I actually need to wash my bra?

Well, that depends on how often you wear it. If you're wearing it multiple times a week, definitely wash it once a week. If you don't wear it as often, you can have more time in between washes. Cohen also says the number of times you wash your lingerie depends on how much you sweat, which is different for everyone.

Is hand-washing them necessary?

Technically, yeah, but everyone knows you won't. The best thing to do if you're going to machine-wash your bras, according to Cohen, is to put them in a lingerie laundry bag. That way, they'll keep their wire shape, and not snag on anything else.

Whatever you do, Cohen says, do not put them in the dryer.

"Heat is the enemy of spandex, and every bra has a little bit of spandex in it," Cohen says. "Heat makes it break down and lose its shape."