How To Shop For A Strapless Bra That Won't Slip, According To A Bra Expert

The wider the band, the more comfortable the bra feels when worn.
by Patricia Melliza for Femalenetwork.com | Dec 13, 2019
Post a Comment

Real talk: Strapless bras aren't the comfiest thing to wear. Mine just won't stay put all day (which leads to uncomfy back pains), and I realized I wasn't alone. My officemate with a C-cup (I've got an A-cup size, by the way) shared the same sentiments. Her strapless bra keeps slipping down her torso that she'd given up wearing it. Like me, she started using stick-on silicone bras. The only downside is that they can be costly and often need replacement. They only last up to a few uses, depending on how you care for them. So, as much as I hate wearing strapless bras, I can't live without them—especially since I like wearing sleeveless and tube tops. I needed advice, so I reached out to a bra expert.

Here, SooYong Hwang, Avon's Intimate Apparel Designer and a graduate of ESMOD Paris design school, dishes her tips and tricks to finding a strapless bra that actually stays up.

What are the most common mistakes women tend to make when buying strapless bras?

SooYong Hwang: A common mistake people make is wearing a bra with a cup that's too small and a band that's too big. When putting on a bra, the "scoop and swoop" [technique] can be done to prevent that.

The proper way to do the "scoop and swoop" is to bend your upper body so that it's easier to identify all of your breasts, and swoop in all the breasts into the brassier cup. Also, it is important to measure your size yearly at [the very] least instead of sticking to [the same] bra size every time.

Any important details we should look for when shopping for strapless bras?

SooYong Hwang: The higher the gore, [or the center of the bra that connects the two cups], the better coverage and support there is for the breasts overall. Also, bras with wider bands and wider wings are better at "attaching" to the body. Designs that have a round-cut cup provide better stability, too! 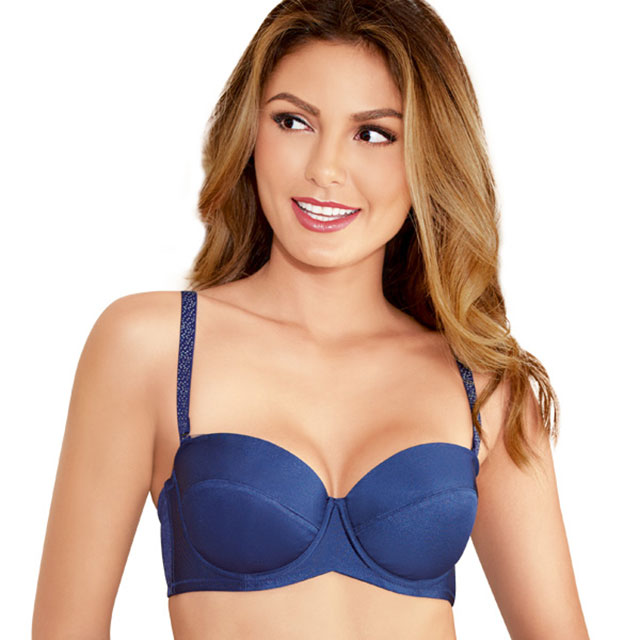 When trying on strapless bras, how can you tell if you've got the right size?

SooYong Hwang: Compared to normal bras, the under band should be a little tighter than usual and the cup [of the bra] should have some leeway. If the cup size is bigger, there is more area for the weight of the breasts to be distributed, preventing the bra from falling down.

[For normal bras], the under band should stay level around your [rib cage]. But with strapless bras, it is better to have the band slightly slanted upwards to keep the bra from falling down.

What are the other telltale signs that you've got the wrong bra size?

Is there a certain bra style that you would recommend for small-chested Pinays?

SooYong Hwang: For small-chested ladies, I would recommend a push-up bra. The thick padding in the lower cup [not only] adds volume [but also coverage] to the breasts.

Plunge bras [are worth trying too.] The shape and angle of their cups bring the breasts together, enhancing the cleavage line. But for something comfortable to wear, I'd recommend a bralette or a bra with a soft cup.

How about for busty ladies?

SooYong Hwang: I'd suggest a full-cup wired bra. [Here], the gore and wire are high, so the bra covers the breasts well. 3/4 cup bras are also recommended as they provide better lifting and support for the breasts.

[Additionally], minimizer bras with shoulder straps that are closer to the center can help breasts look less busty.