Get better acquainted with the sexy Azkal in his exclusive interview, and view a bunch of hot photos from his Cosmo shoot!
by Dawn Niekamp | Nov 8, 2011
Post a Comment
Featured 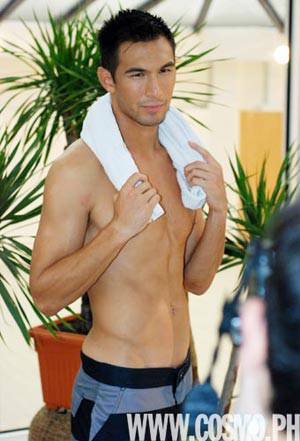 Anton del Rosario has got to be one of your favorite Azkals, and he showed off his rugged appeal just for you, Cosmo chicks, at his Centerfold shoot. This 29-year-old hottie charmed us with his confidence and sense of humor; the entire Cosmo team felt kilig the whole time he was on the set.

Anton plays defender for the national team, which he's been a part of since 2000! This hot Filipino-Spanish athlete was born and raised in the US, however. His parents and older brother (Armand del Rosario, a former Philippine international booter) influenced him to get into football, and he started playing when he was just 5! But, that obviously did not distract him from completing a degree in Business Administration!

With the Azkals' popularity, he adds another feather to his cap as he proves to be a valuable endorser and great model. The camera just loves him! It was so easy shooting his Centerfold feature, and now you'll finally see behind-the-scenes photos when you launch the gallery! (We hope you've seen his behind-the-scenes and interview video; click here if you haven't.)

Before you view the pics, get to know Anton more in the interview below, where he talked about his style in the bedroom and other topics that made the footballer laugh and blush!

I don’t know. It's pretty interesting. I feel privileged.

What was your reaction when you found out you'll be part of this year's lineup?

I started laughing. I find this kinda funny but it's fun.

What sets you apart from the rest of the Azkals?

I'm one of the more social ones on the team. I like to go out and meet new people, have fun.

How would you describe your personality in the bedroom?

You told Azkals Magazine that you like chocolate. Is this something you'd want to bring into the bedroom, too?

Name one thing you'd still like to try in bed.

I've kind of done most of the the things I've wanted to do.

What article of clothing do you find sexy on a woman?

What do you wish girls would stop wearing?

If you were to take your girl on a romantic vacay, where would you go?

My favorite place that I've been to--Maldives. I like the beach, and it's a nice getaway. With the beach right there and the water...it's amazing.

What would be your itinerary in the Maldives?

Well, when we first arrive there, I'd get my alone time... (Laughs.) [Then], a pretty nice dinner, maybe a little tour. I'm very spontaneous when it comes to stuff like that. I like to figure it out as we go along.

What's the best thing to do after sex?

How would you describe Cosmo?