Finally, the other HOT Younghusband we've been waiting to see in the Cosmo Men supplement is now a Centerfold. View outtakes from his shoot and read his exclusive interview!
by Dawn Niekamp | Nov 22, 2011
Post a Comment
Featured 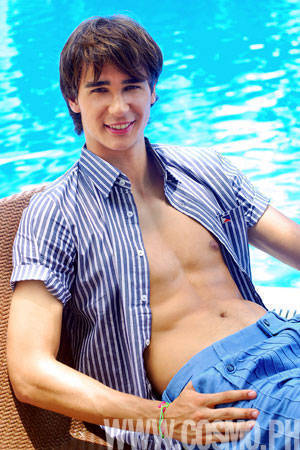 This is not the first time you've seen James Younghusband featured in Cosmo.ph. Aside from catching up with him and his brother Phil, plus the rest of the Azkals in various events (where we asked him about fashionalism, nationalism, football, and even heartbreak, among others), if you'll remember, he's one of our very first Cosmo Online Hunks back in December 2009--and he was such a hit! But, you'll also notice that he was, well, fully-clothed back then. Now, you'll see his sexiness in all its open-shirt glory. (He himself admits he's "proud to flaunt my abs"!) Just imagine how much hotter he looks!

We're sure you've seen his hot Centerfold photo in the Cosmo Men 2011 supplement, but now we give you something more: over 60 behind-the-scenes photos taken during his Centerfold shoot (where he bares a little more skin)! You got a sneak peek in CosmoTV, but this time, you can see more of what went on during his shoot and tap into his sweet and sexy personal side as we publish his full interview.

Launch the gallery to see behind-the-scenes photos from James' Cosmo shoot and read about what turns him on and off (you'll be surprised!)--and what flirting tips he has for girls who want to make the first move!

What are you busy with and enjoying most right now?

We're taking a break at the national team, then again we're just busy with our local team, and we have a few projects lined up in our football academy.

What do you enjoy doing these days, in your free time?

Just spending time with my family and my girlfriend.

What made you want to be a Cosmo Centerfold?

To be honest I thought about being a Centerfold before because my brother was one a few years ago (2009), and I actually went to the event with him. It was very cool.

What part of your body are you proudest of and like to flaunt the most?

I'm proud to flaunt my abs. I think my face is okay as well, but my abs--because I've worked hard to become really fit to play soccer and I feel that is the part I really benefit from. It's like your core, your structure, your center.

Aside from your abs, what other part of your body do you consider the sexiest?

I've heard my eyes are my sexiest part of me, because, to be honest, it's rare that I show my body except when it's really hot, when I'm playing soccer. Yes, I'm really proud of my eyes. And I think, myself as a person, I find sexy. That may sound cheesy but I'm being honest.

What do you love about women in general?

To be honest--I'll take my girlfriend for example: I just love girls when they're confident, really. That's a hard question because girls are all different. I like girls, but I especially love my girlfriend.

How do you demonstrate affection?

I'd always compliment her. I'd always try and spoil her. I'm a guy who gets happy from spoiling my girlfriend.

Name three things that make a girl sexy for you?

Confidence, beauty, and [a girl who's] just being herself, really. I don't like girls who try to be someone else for people.

What three things turn you off?

Okay, you'll laugh at this one: girls who eat potato chips--not a fan of it. I don't mind you eating it, just not in front of me. I just have a dislike for them. Also, [girls who wear] too much makeup, and girls who are full of themselves.

What flirting tips can you share with our readers?

Be straightforward, be confident, but not overconfident. Just have a go with it. Don't be afraid to fall.

What's the craziest thing you've ever done while traveling?

How do you and your girl like to relax?

I don't like too much work. I like to relax on the beach, play soccer, just eat and drink as much as we can.

How does your girlfriend show you her support?

She gives me massages. She makes me really comfortable. When I'm with her my stress goes away, I'm very at peace, and I have no worries.

Launch the gallery to see behind-the-scenes pics from James' Centerfold shoot! Watch for James and the rest of the Centerfolds at the Cosmopolitan Bachelor Bash telecast on Sunday, Nov. 27, 9PM, on ETC! They will show behind-the-scenes footage of all Cosmo Men shoots!