Aljur Abrenica: On Life After Being A Cosmo Centerfold

Cosmo named him one of the hottest men in 2009, and he has been getting hotter since. He tells us how Cosmo played a part in his successful career.
by Nora Hizon | May 27, 2011
Post a Comment
Featured 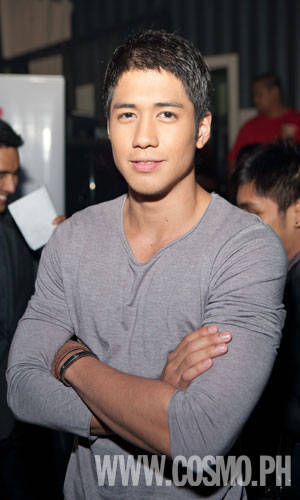 All his life, Aljur Abrenica has been told that he should be a model... and he listened. When he joined GMA-7 talent search Starstruck, he was crowned the Ultimate Hunk (and, arguably, no one else deserved the title better to date). And when Cosmo shot him as one of the ten Centerfolds in 2009, he proved to be one of the hottest of the bunch. Posing and looking gorgeous may come naturally to him, but this guy works hard for it. And, there's more to him than that.

One of the hottest actors on the GMA-7 roster of talents, this 21-year old currently stars alongside his on-screen partner Kris Bernal in Spooky Nights Presents: The Ringtone. An up and coming matinee idol, he is also working on his latest movie project, Temptation Island. Soon, you'll also see him in Panday 2.

Call him a modern-day Machete (he did star in the GMA-7 adaptation), but he actually fits that description. With his well-defined body, tanned skin, and striking Filipino good looks, Aljur is the Cosmo Hunk everyone perennially falls for. And since his debut in Cosmo Men in 2009, he has been on every Cosmo chick's radar.

Just imagine the glee on lucky Cosmo chicks' faces when we brought him to party with us at the first leg of Cosmo Club Scene in Encore last month! We caught up with him for a quick interview so we have something to share with you, too, if you didn't get to join us then.

How did being a Cosmo Centerfold in 2009 affect you?

Sobrang laki. It changed my career, my lifestyle, and image. At good na rin kasi pinapakita ko na I can also be a sexy icon.

How has life been since you became part of Cosmo Men 2009?

How do you feel about being one of Cosmo's Centerfolds?

It's our Fun, Fearless Female month; what do you think of fun, fearless females?

We'd like to know: are you currently dating anyone?

Wala e. Hanging out with my friends lang... with Kylie Padilla.

Do you have plans of getting into a relationship anytime soon...with anyone (hint, hint)?


Launch the gallery to see photos of Aljur partying at Encore during Cosmo Club Scene 2011!