Today, October 6, model and #MeToo advocate Ambra Gutierrez gave a shoutout to Gretchen Fullido for filing a case against ABS-CBN news executives for sexual harassment. On her Instagram stories, Ambra shared a screenshot of the Cosmo.ph report on the issue and wrote "Yes!!! @gretsfullido." 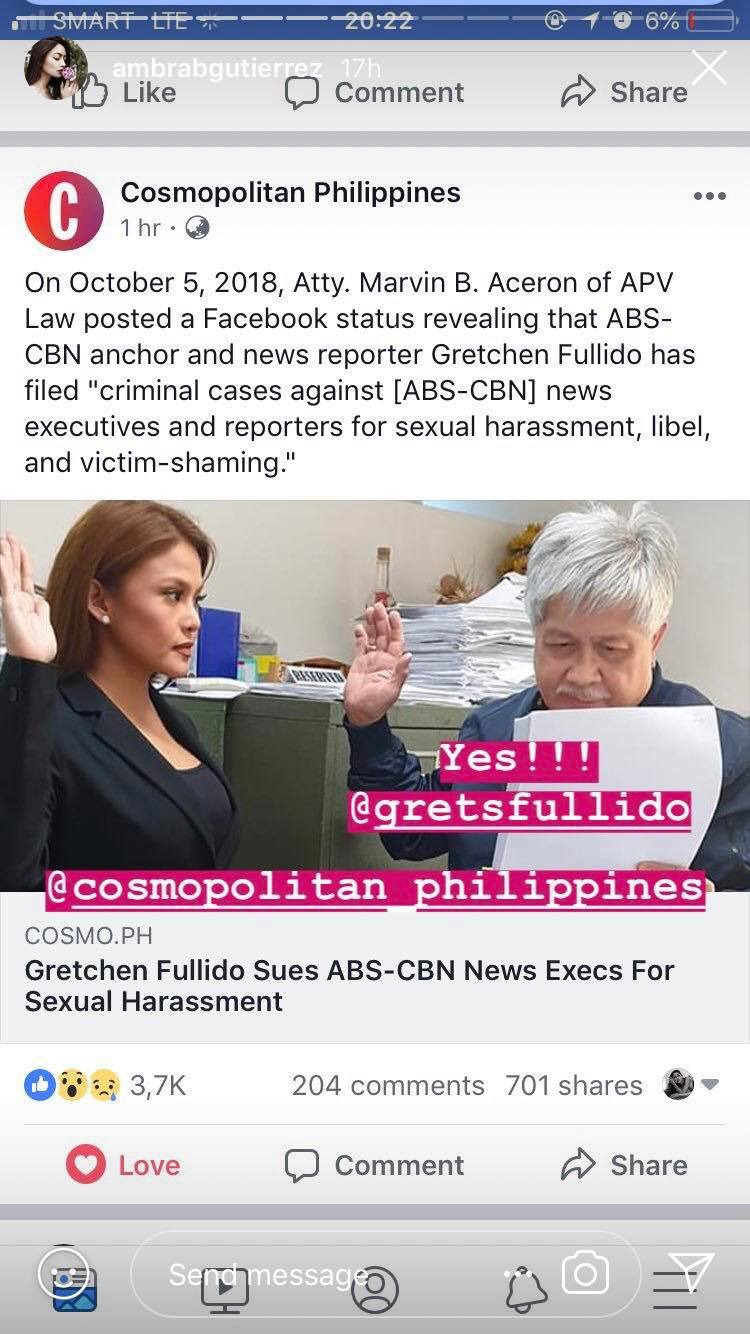 Ambra and Gretchen interacted recently. Gretchen interviewed Ambra about how her life has changed since filing a case against Harvey Weinstein for sexual harassment, and how she found vindication. Post-interview, the news anchor also shared a photo of her and Ambra on Instagram and captioned it, "One of the first to speak out about sexual abuse against Hollywood producer Harvey Weinstein, Ambra Gutierrez talks to us about depression and how she lost everything when she reported the incident to the police. Since the truth came out, she feels vindicated. The 26-year-old model tells us about her sweet comeback and becoming a @victoriassecret model. She is the third Filipina Victoria’s Secret model after Miss Universe 2012 Janine Tugonon and Fil-Am Kelsey Merritt, who will be the first Pinay to strut the runway at the VS Fashion Show. Ambra also made the podcast In Our Words as a way of helping others. She hopes she inspires others to not be afraid to fight for what is right."

Gretchen has also been receiving support from other netizens for her fight against sexual harassment in the workplace. Her story trended on Twitter after the reports surfaced that she was suing Cheryl Favila, former TV Patrol supervising producer, and Maricar Asprec, who allegedly sent Gretchen text messages loaded with sexual innuendos that amounted to requests for sexual favors.

Viewers who are following Gretchen's case were surprised to see that Gretchen was working on TV Patrol last night. She reported that Jerrold Tarog replaced Erik Matti as the new Darna director, and announced that Harlene Bautista and Romnick Sarmenta are separating.