Is Anne Curtis making her much-anticipated return to the Star Magic Ball on September 30, Saturday?


Over the weekend, Anne, a contract artist under Viva Entertainment, took to Instagram to show how grateful she was for receiving an invite to the star-studded event. In an IG Story, the It's Showtime host snapped the formal invitation addressed to her. Writing on the caption, she said, "Thank you, Star Magic." 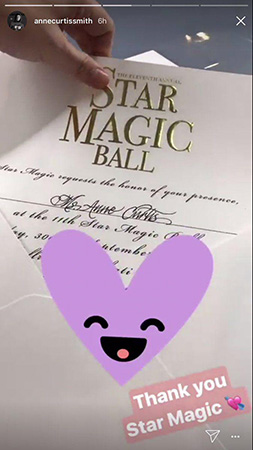 Anne was last seen at the ball in 2010 in a stunning Michael Cinco gown. In 2009, she had former boyfriend Sam Milby as her date. By 2010, the two had parted ways and they went to the event separately. In A Pep.ph story, Anne explained, "Baka maging awkward lang! But, you know, we're still friends and that's all that matters. We're here to both have fun."

Editors' Note: It was originally written that Anne Curtis last attended the Star Magic Ball in 2009, based on an ABS-CBN story. This version has been updated.