Aubrey Miles shows off baby bump for the first time

After announcing her pregnancy over the weekend, Aubrey Miles debuted her growing baby bump on Instagram. The 38-year-old fitness enthusiast revealed that she's on her second trimester in the caption, saying, "Here you go guys. Chest out stomach out. On my 2nd trimester, still experiencing major morning sickness but trying my best to sweat all the [cookies] I ate." This is Aubrey's third child and her second with partner Troy Montero.

Heart Evangelista earlier announced that she will be taking a break to travel. Now, she's been spotted making the rounds at the Couture Fashion Week in Paris alongside Kevin Kwan, the best-selling author of Crazy Rich Asians, and a number of Asian socialites.

Check out Bea Alonzo's adorable IG story of her in Kay Tagal Kitang Hinintay, her very first soap. Bea was only 13-years-old when she starred in it alongside John Lloyd Cruz. 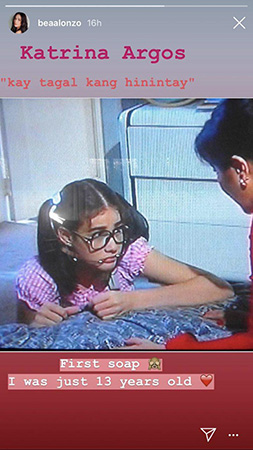 American Idol alum Katharine McPhee and music mogul David Foster just got engaged! The two, who first met when Katharine was a contestant on the reality show, were currently on vacation in Capri when the news broke. Katharine seemingly confirmed the news with a cheeky Ariana Grande GIF she posted on Twitter. (Cosmopolitan.com)

Janina Vela leads YouTube Creators For Change in the Philippines

Teen YouTube star Janina Vela was chosen to represent the Philippines in the global program YouTube Creators For Change in partnership with the United Nations Development Programme. Janina, along with 16 other young content creators from the Philippines, will undergo a series of Boot Camps to produce content about local issues. The Boot Camp will run through June to November 2018 and will be held in the Philippines, Australia, Indonesia, Malaysia, and Thailand.