Take a peek at the outfits Cosmo's styling team picked out for our stunning August 2012 cover chick!
by Laura Beck | Aug 13, 2012
Post a Comment 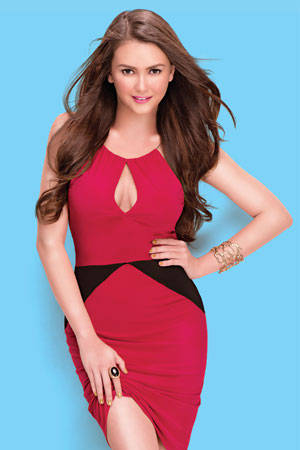 Angelica Panganiban is the child star who shone well beyond her wonder years. With an angelic face, womanly curves, and a comedic charm that have consistently won her fans throughout her long showbiz career, it's no wonder this award-winning actress lands her fifth Cosmo cover this month.

There's no denying that her onscreen versatility--not to mention her immaculate mestiza features--also means she looks gorge no matter what style she's sporting. From her girlish debut in September 2006, that edgy cropped 'do in August 2008, her bombshell appeal in February 2010, her fresh and carefree allure in August 2011, to newly single and super-sizzling on the August 2012 cover, Angelica Panganiban just keeps getting sexier and sexier.

For her smoldering comeback, we amped up the glam in this showbiz siren via fire engine reds and flattering silhouettes. Want to see the chic ensembles Cosmo pulled out for Angelica's cover shoot? Launch the gallery now for an exclusive peek!