Need a pick-me-up? Your wish is our command! View 100+ steamy outtakes of our super handsome main man for this month's ish. He's sure to put a smile on your face!
by Dawn Niekamp | Aug 9, 2011
Post a Comment
Featured 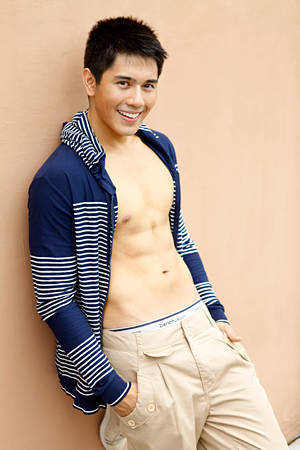 Sometimes, after a complicated, stressful breakup, all you need is a breather--a guy who's easy-going and easy on the eyes. Think Paulo Avelino, Cosmo's Man On Fire for August.
A caveat, ladies: He's just there for visual inspiration, as this handsome guy is already accounted for (his girlfriend is actress LJ Reyes, lucky girl).

Still, who says we can't enjoy the sight of this effortlessly gorgeous actor-model-host with a chiseled bod? The 23-year-old began his showbiz career when he joined GMA-7's talent search Starstruck in 2006. (Three years later, he was a co-host of the show's fifth season.) In the last five years, Paulo has appeared in numerous GMA TV series. Most recently, we saw him play leading man Billy in Alakdana. He's been on the big screen, too. He starred in the horror series Shake, Rattle, And Roll 13 and in an indie film for last month's Cinemalaya called Ang Sayaw Ng Dalawang Kaliwang Paa.

Given his credentials, it's no wonder the Cosmo team and photographer Doc Marlon Pecjo had a breeze working with Paulo. He proved to be a natural Cosmo hunk, breezing through the layouts (we couldn't help but swoon as we watched him!). He made all the preppy clothes stylist Donna Cunna-Pita pulled out for him look sexy, as he wore them in his naturally care-free, relaxed manner.

While Paulo is down-to-earth and game, he prefers to keep his private life below the radar. He did divulge certain things about women, dating, love, and breakups in our exclusive video interview with him, so do watch for it on CosmoTV!

In the Man On Fire section of your August Cosmo ish, Paulo also lists "10 Things That Would Make A Guy Call You Back." Now, that sure is one list you need to get your hands on, so grab a copy now (it has Angelica Panganiban on the cover!).

To get you more excited for his magazine feature, launch the gallery to see over 100 exclusive outtakes of what went on in Paulo's effortlessly sexy shoot!