Behind The Scenes With Cosmo Centerfold Hall Of Famer HIDEO MURAOKA

Sexy, romantic, and disarmingly charming, Brapanese babe Hideo Muraoka leaves us eternally smitten. Launch the gallery to see him in all his hotness!
May 28, 2012
Post a Comment
Featured 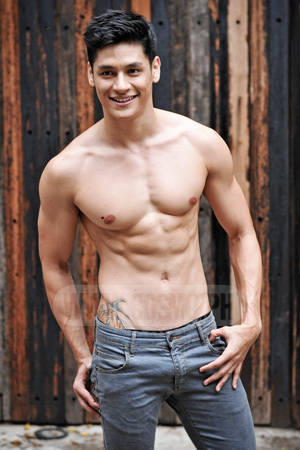 It was only last year when Brapanese Centerfold Hideo Muraoka took a dip in a pool and cast us an inviting smile, cementing his place in Cosmo girls' crush lists for good. He even channeled a real-life Romeo by handing out red roses at the 2011 Cosmo Bachelor Bash. Swoon!

Hideo first rose to supermodel status in the Philippines in 2009, becoming the face of clothing brand Folded and Hung and making a cameo in magazines such as Men's Health. But what's even sexier about this Brapanese babe is he's got the brains to go with his good looks. The 25-year-old Sao Paulo native was actually about to take up a law degree when he decided to become a full-time model!

Hideo also humbly tells us that his modeling start here happened by accident, when a talent scout randomly spotted him in the MRT. Whether it was a stroke of luck or some form of divine intervention, we're mighty thrilled that fate brought him to our tropical shores.

We know you're itching to see more of this hottie, so launch the gallery to see exclusive outtakes from his shoot and start drooling!