A Definitive Timeline Of Angelina Jolie And Brad Pitt’s Relationship

After more than a decade together and two years of marriage, Angelina Jolie and Brad Pitt are over. TMZ reported Tuesday that Angelina filed for divorce, citing “irreconcilable differences.” She has also requested for physical custody of the couple’s six children, with Brad having joint legal custody and visitation rights. While you try to digest the reality of this news, here is a look back at their unconventional Hollywood love story.

April 2005: Rumors about Brad and Angelina’s romance reach a peak when photos of them vacationing in Kenya with Angelina’s son Maddox surface.

May 2005: Angelina denies that there was any off-set chemistry with Brad during the production of Mr. & Mrs Smith. She tells Marie Claire, “We got on great … to be intimate with a married man, when my own father cheated on my mother, is not something I could forgive. I could not, could not look at myself in the morning if I did that.” 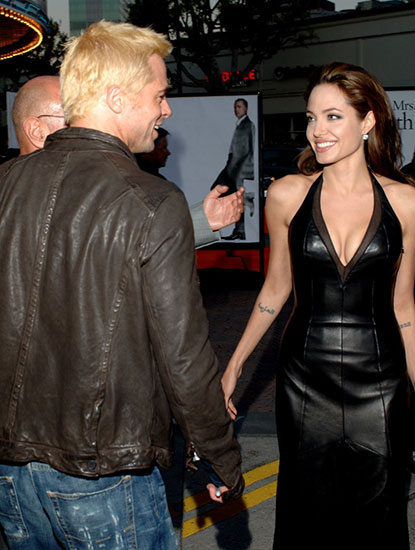 June 2005: Brad and Angelina attend the Los Angeles premiere of Mr. & Mrs. Smith, but do not pose for red carpet photos together.

Angelina reiterates her comments about not having an affair with Brad, telling the Today show, “I wouldn't be attracted to a man who would cheat on his wife.” She also says, “People will say what they want to say, and it’s OK. And my life will go on, and I need to focus on my life. So, do I need to defend that I’m a decent woman? I sure hope I don’t. I know I am.”

July 2005: Brad and Angelina are featured in a special W magazine spread titled “Domestic Bliss.” The spread caused an uproar with fans of Brad and Jen, since they were taken in March. 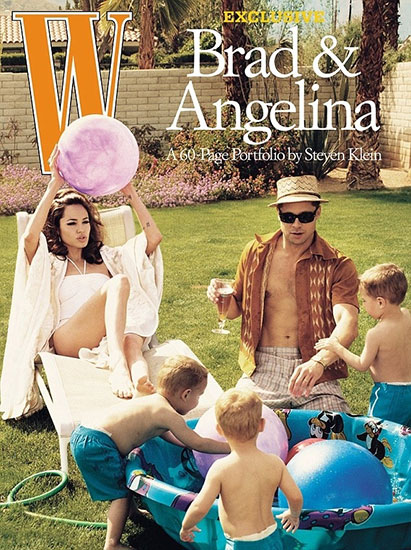 January 2006: Angelina confirms to People that she’s expecting her first child with Brad. “Yes, I am pregnant. We’re due in the summer.” 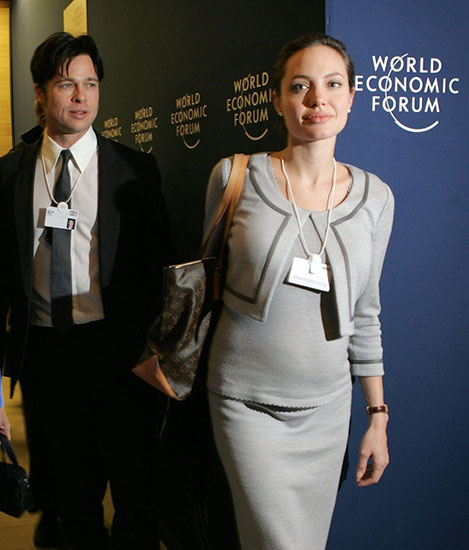 It’s also revealed that a judge has granted the couple’s request to legally change Maddox's and Zahara’s last names to Jolie-Pitt.

May 2006: Angelina gives birth to daughter Shiloh Nouvel in Namibia. The couple sells the baby’s first pictures through Getty to benefit charity. They give a press conference days later. “Our other daughter [Zahara] was born in Africa and so this is a special continent for us,” the couple said at the time.

June 2006: Shiloh covers People magazine with her parents. It’s later reported that the magazine purchased the North American photo rights for a whopping $4.1 million. Hello! Purchased the British rights for $3.5 million. Proceeds from both magazines were donated to UNICEF. 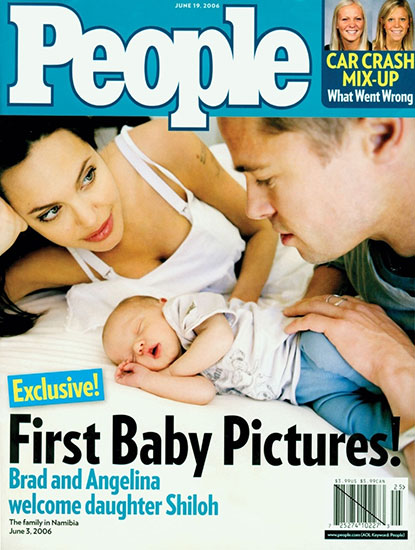 October 2006: Brad tells Esquire that he and Angelina will only marry “when everyone else in the country who wants to be married is legally able.”

December 2006: Brad and Angelina finally pose together for the first time on the red carpet for the premiere of The Good Shepherd. 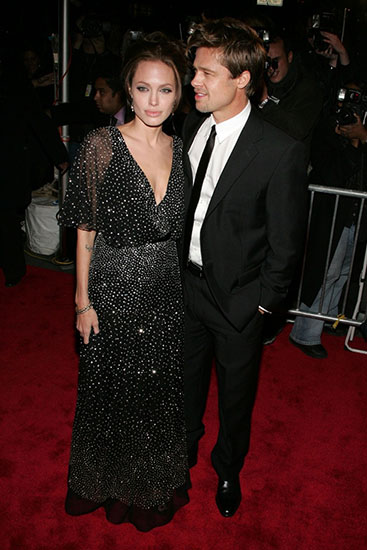 March 2007: Angelina adopts Pax, 3, from an orphanage in Vietnam as a single parent per the country’s adoption laws against unmarried couples. Pax’s legal last name is changed to Jolie-Pitt one month later.

May 2008: Angelina and Brad announce at the Cannes Film Festival that they’re expecting twins. 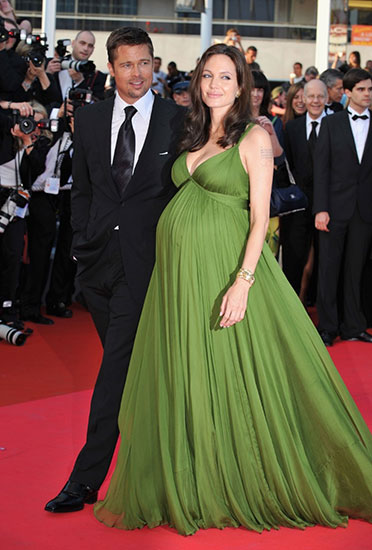 July 2008: Angelina gives birth to Knox Leon and Vivienne Marcheline in Nice, France. Photos of the babies are sold to People and Hello! again, this time for a reported $14 million, making them the most expensive celebrity photos ever taken. All proceeds from the sale are given to the Jolie-Pitt Foundation. Two-year-old Shiloh also makes the cover. 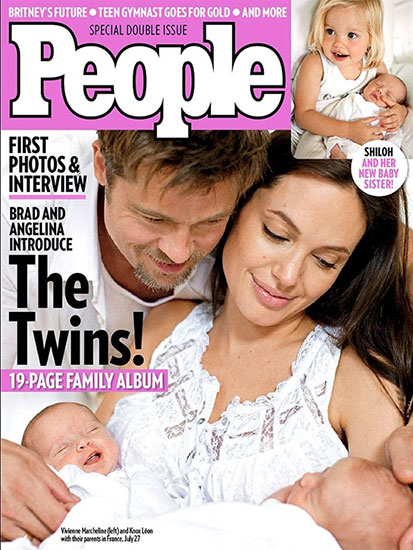 October 2008: In an interview with the New York Times, Angelina reveals that Mr. & Mrs. Smith is a movie where she and Brad "fell in love." 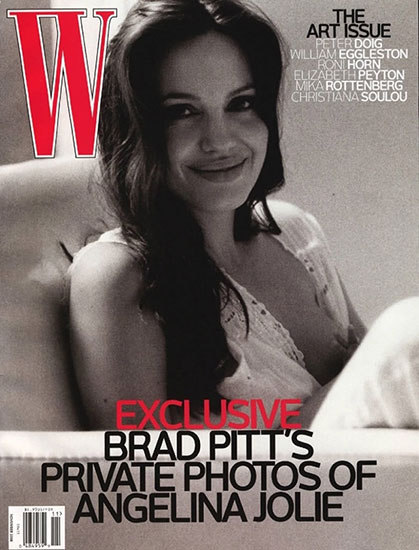 November 2008: Angelina covers  W magazine with photos taken by Brad at their home in France. Angelina tells the magazine, "I do think that I'm in a good partnership now. I think it just needed to be the right man." She adds that she has "a lot of respect" for Brad: "He helps me to be better and fight hard for things that I love."

December 2008: Brad tells Rolling Stone that Mr. & Mrs. Smith is his favorite Angelina Jolie film. “We’ve never seen it. I just mean because, you know … six kids. Because I fell in love.”

Seemingly responding to Angelina's New York Times interview from October, Jennifer Aniston tells Vogue, "There was stuff printed there that was definitely from a time when I was unaware that it was happening. I felt those details were a little inappropriate to discuss ... That stuff about how she couldn't wait to get to work every day? That was really uncool."

July 2010: Angelina paints an intimate portrait of her life with Brad in Parade magazine. "There's never a period when Brad and I are pulled apart. We are not separated for more than three days, ever. We stay really connected. We actually don't go out much. It's funny. We're very homebound. We're very much Mommy and Daddy in our pajamas."

Continue reading below ↓
December 2011: Angelina tells Christiane Amanpour that the Jolie-Pitt kids are pressuring Brangelina to get married. “The kids asked me the other day, and I asked them if it was just because they wanted to have a big cake. They see movies that have the people getting married in the movies or somebody's, you know, the happily ever after. Shrek and Fiona are married. … We've explained to them that our commitment when we decided to start a family was the greatest commitment you could possibly have. Once you have six children … you're committed.” 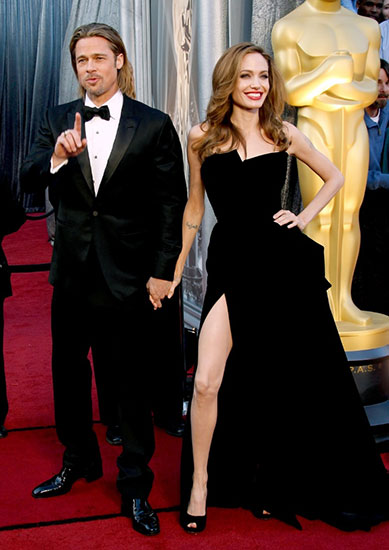 April 2012: Brad and Angelina are engaged. The news is confirmed by Brad’s manager: “Yes, it's confirmed. It is a promise for the future and their kids are very happy. There's no date set at this time.” Rumors begin to swirl about the engagement ring's price, estimated to be from $325,000 to $1 million 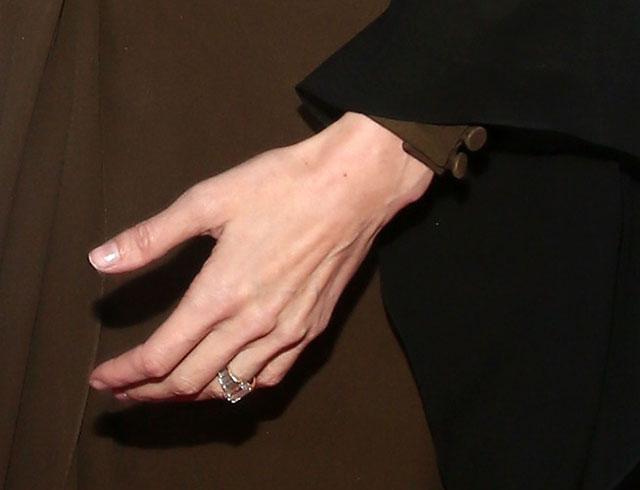 Continue reading below ↓
May 2013: Angelina pens a powerful op-ed in the New York Times about her decision to have a preventative double mastectomy after learning she was at high risk for both breast cancer and ovarian cancer. “I am fortunate to have a partner, Brad Pitt, who is so loving and supportive. So to anyone who has a wife or girlfriend going through this, know that you are a very important part of the transition. Brad was at the Pink Lotus Breast Center, where I was treated, for every minute of the surgeries. We managed to find moments to laugh together. We knew this was the right thing to do for our family and that it would bring us closer. And it has.”

Brad calls Angelina “heroic” in the London Evening Standard: "Having witnessed this decision firsthand, I find Angie's choice, as well as so many others like her, absolutely heroic. I thank our medical team for their care and focus. All I want for is for her to have a long and healthy life, with myself and our children. This is a happy day for our family."

In an Esquire interview, Brad discusses the joys of his family in great length. "I always thought that if I wanted to do a family, I wanted to do it big. I wanted there to be chaos in the house ... There's constant chatter in our house, whether it's giggling or screaming or crying or banging. I love it. I love it. I love it. I hate it when they're gone. I hate it. Maybe it's nice to be in a hotel room for a day — 'Oh, nice, I can finally read a paper.' But then, by the next day, I miss that cacophony, all that life." 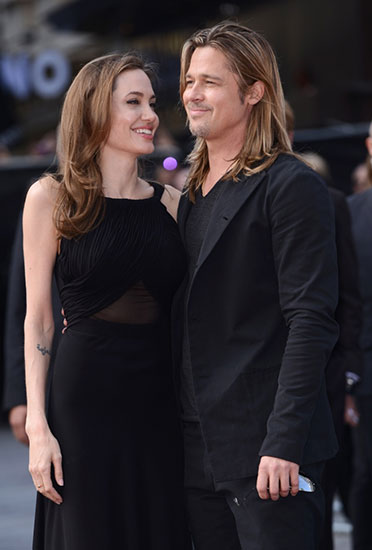 August 2014: Brad and Angelina marry at their French estate Chateau Miraval in Correns. Brad's wedding ring makes its debut at the Fury photo-call in England. 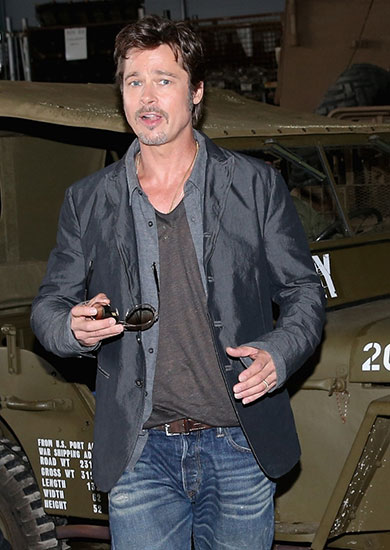 September 2014: Angelina’s wedding dress, partially designed by her kids, is revealed on the cover of Hello! 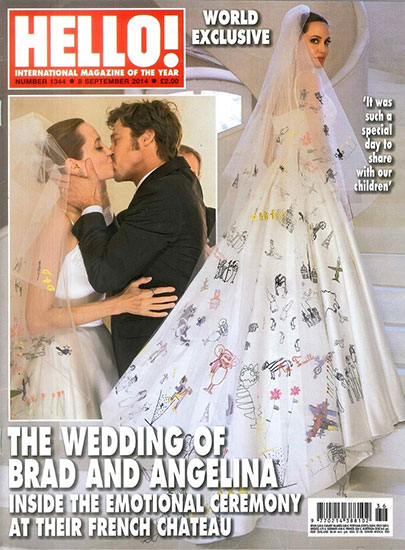 November 2014: Brad and Angelina spend part of their honeymoon in Malta filming their second project together, By the Sea, which is also directed by Angelina. They make their first red carpet appearance as a married couple at the premiere of Unbroken.

March 2015: Angelina reveals in a New York Times op-ed that she underwent surgery to remove her ovaries and fallopian tubes after doctors detected possible signs of early cancer. “I feel feminine, and grounded in the choices I am making for myself and my family. I know my children will never have to say, 'Mom died of ovarian cancer.’”

Continue reading below ↓
November 2015: Angelina and Brad give a rare joint interview with Tom Brokaw on The Today Show. They share similar remarks about each other when speaking about Angelina’s double mastectomy and their family. “There was no vanity to my wife’s approach. It was mature, it was an excitement, to where, ’This is our life and we’re gonna make the best of it.’ There was a strength in that,” Brad says. “It was just another one of those things in life that makes you tighter. She was doing it for her kids and doing it for her family, so we could be together. It trumped everything and anything.” According to Angelina, the experience confirmed to her what Brad saw in a woman: “Somebody that was smart and capable and cared for her family. it’s not about your physical body. I knew through the surgeries that he was on my side. and that this wasn’t something where I was gonna feel less of a woman because my husband wasn’t going to let that happen.”

Later in the month, Angelina and Brad attend the premiere of By the Sea at the AFI Fest in Hollywood. It would be their final red carpet appearance as a couple. 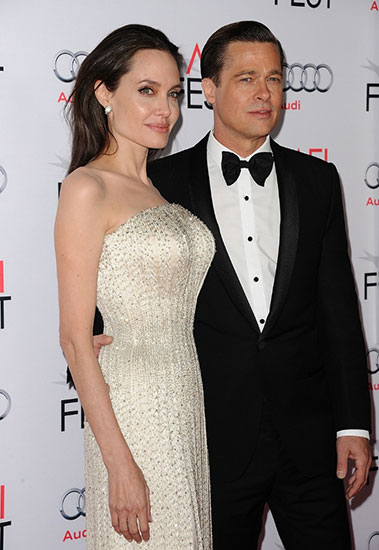 September 2016: Angelina files for divorce from Brad, just weeks after their second wedding anniversary. TMZ reports that Angelina is not asking for spousal support and in her divorce papers, lists the date of separation as Sept. 15, 2016. CNBC has obtained a statement from Angelina via her attorney: "This decision was made for the health of the family. She will not be commenting, and asks that the family be given its privacy at this time."

Brad also also issued his own statement to People: "I am very saddened by this, but what matters most now is the well being of our kids. I kindly ask the press to give them the space they deserve during this challenging time."