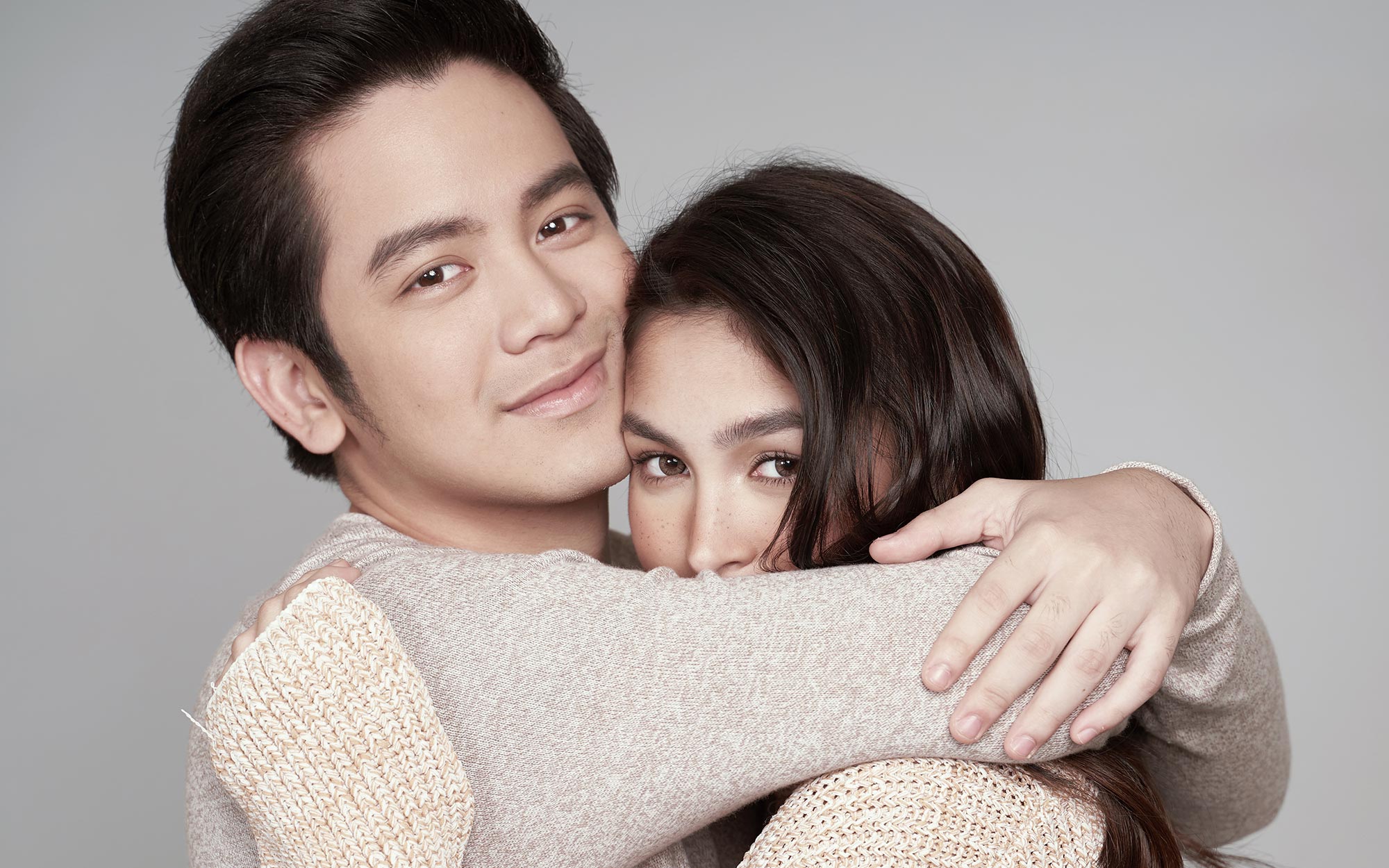 Their "ritual": They slow dance to an Ed Sheeran song before parting ways.

It was an unplanned pairing. They had their separate career paths in the beginning: Julia Barretto was carving her own niche as an actress in a country where her showbiz family is a household name, and Joshua Garcia was a newbie who got his start when he joined Pinoy Big Brother back in 2014.

They were paired together in the sleeper hit Vince & Kath & James in 2016, and it was movie magic. Fans loved their on-screen chemistry so much that it gave birth to JoshLia, one of the most followed love teams today.

When they first met for the project, Julia was the first to approach him, which Joshua found flattering. "When I was told she was going to be my partner, I felt doubly blessed. Kasi si Julia 'yan e, I have been watching her on TV for a long time," he recalls. "The project itself was a blessing, kasi madalas soap muna bago ka bigyan ng movie, sa akin, movie agad tapos siya pa ang kasama ko."

He teases his partner for being the one to make the first move. "Gwapong-gwapo kasi siya sa akin! Sabi ko, chance ko na ito," he exclaims. Julia jokingly protests with an eye roll and a "whatever," and adds: "People think I am hard to approach. The only way for people to not think of me that way is for me to approach them first." 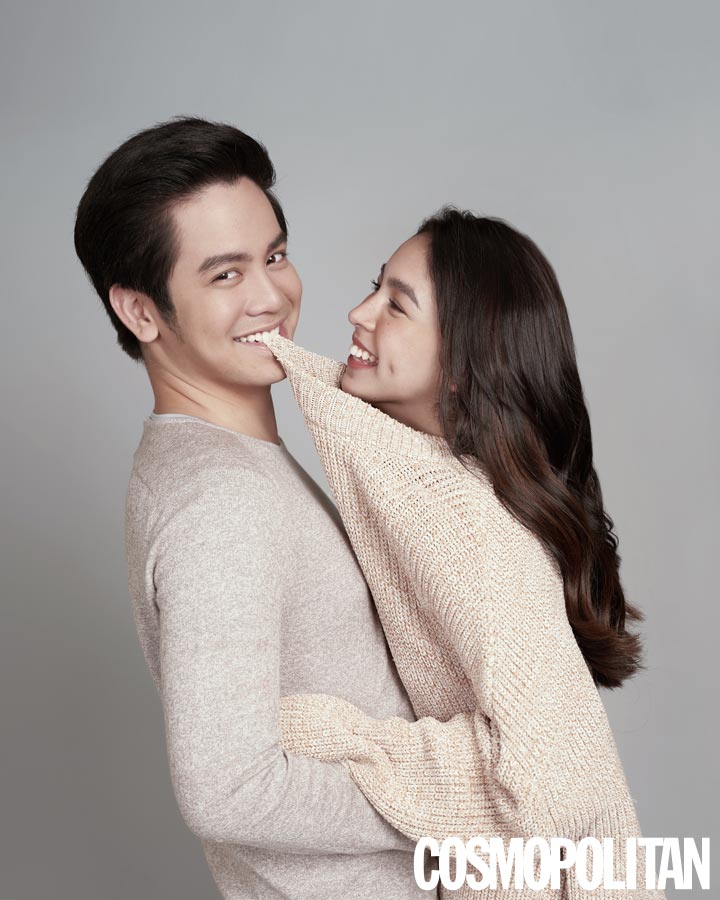 "People think I am hard to approach. The only way for people to not think of me that way is for me to approach them first." —Julia

She reveals that it was Ms. Charo Santos-Concio who gave her the advice to make the extra effort. "She said, as long as people think you are hard to approach, they really won't approach you. It is my job to make them feel comfortable with me and make them realize, 'Oh, I can really talk to this person.' So I wanted to show him there was nothing to be afraid of. Up to now, though, takot siya sa akin," she says with a grin. 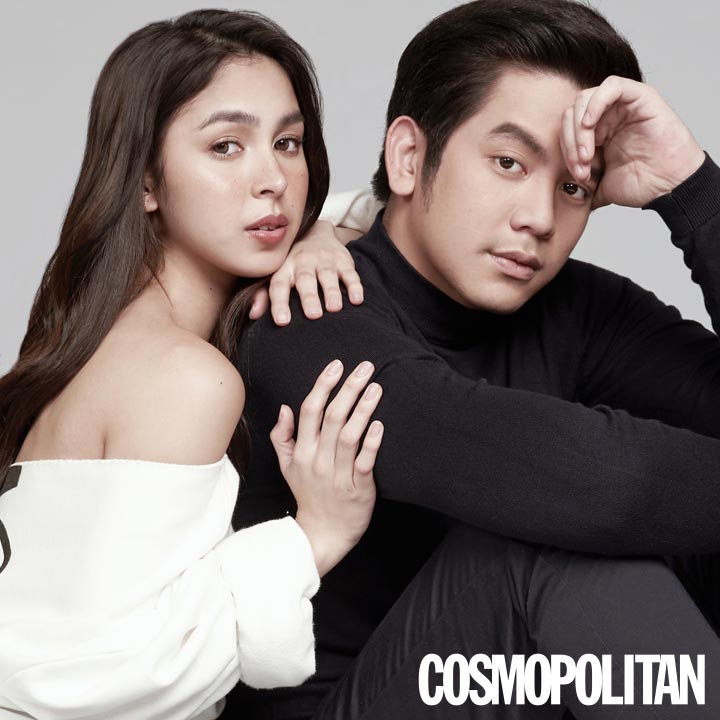 They have been together for two years, and they share they have discovered many things about each other in the process. They both love eating, they say, with Julia loving it more. "Ang lakas kaya niya kumain," he teases. She retorts, "I brought him to fancy restaurants."

They also learned patience from each other. "I realized, important pala talaga ang patience, not only in relationships but in general. [On the] set, you deal with people and adjust to different people in the industry. Patience is so perfect for every situation. I learned patience from him because he is a really patient guy." On cue, Joshua adds, "Ako din, patience, na dapat hindi nauubos ang pasensiya. Dapat sa kanya unli-patience!"

When asked who is more pikon of the two, they turn on each other. She rolls her eyes at him. "He is pikon, as in! He would do something to annoy me and even when I tell him to stop, he will keep doing it mga 20 times until I turn into this monster, and then he will get mad at me for getting mad at him? How unfair is that?" Joshua, who has been rubbing her feet, raises his eyebrows suggestively and says, "Pero nami-miss mo 'yan 'pag wala ako." Julia sighs and agrees.

"Weird siya," Joshua volunteers, and Julia agrees again: "He is the only one who has seen me sing and dance like crazy." The performances are meant only for his eyes, and he describes them as "hataw na hataw [at] wala siyang pakialam kahit pangit ang sayaw niya."

Speaking of dancing, they have a a charming "ritual": They slow dance to an Ed Sheeran song before they part ways for the day. "That's my lambing," Julia explains. "I ask him to dance with me first before he leaves." He grimaces, "So ayan, bago ako umalis, nangangalay ang paa ko sa sayaw kasi nakatapak siya sa akin habang sumasayaw kami!"

When asked to talk about his pre-showbiz life, Joshua takes a serious turn. "Buhay ko noon, sobrang simple. Simpleng magulo," he says. "Hindi kami gan'un kayaman, magkahiwalay magulang ko, wala kaming sariling bahay." He is quick to add that he enjoyed the simple life, and he misses his friends and family in Batangas, whom he has been too busy to visit. If there is a lesson he learned from his past, he says, "Magtiis, at saka magsumikap. My uncle taught me na kapag may gusto ako marating, kailangan ko magtiis." 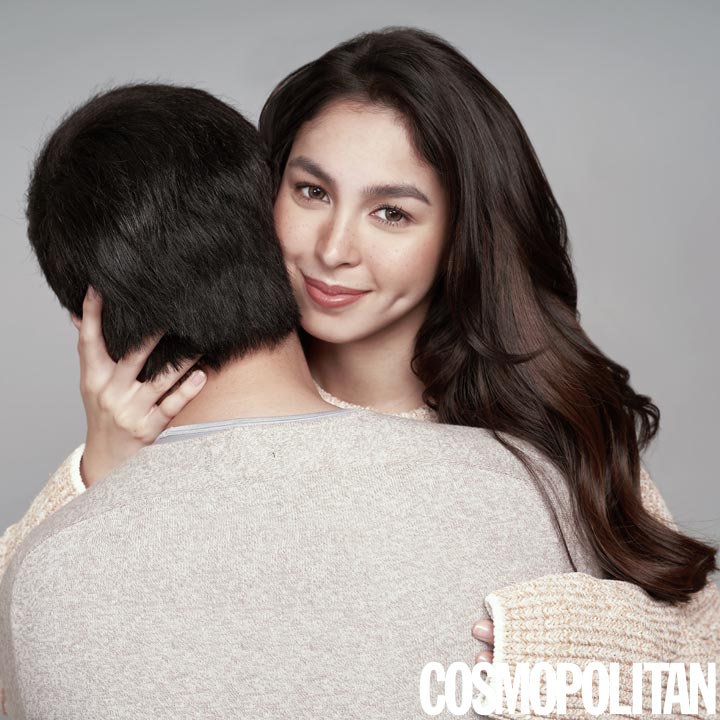 Talking about her own experiences, Julia says that hers was not really far off from Joshua's. "You know, it's funny that people perceive we have this fabulous lifestyle. A lot of people think we were so privileged. We had our own challenges while I was growing up." She recounts moving from house to house until the time they were able to purchase their own home.

"Be confident, love yourself, and don't stray from your values. This way, you won't be affected by anything negative that they say." —Julia

"It was a struggle," she says with a sigh. "It was not always like we could buy what we want. I was a student, and if I get work from commercials, those were the only times I would buy something for myself. The impression they have of us is understandable, because I grew up with my family in the spotlight, but it is really not all that glamorous." These days, the actress says she provides for herself and even helps out her siblings.

The lesson she learned was to appreciate what you have while it is still there, and not to focus on things that you don't have. "If you want something and you don't have it yet, work for it," she quips.

Having similar experiences growing up has served as a bond for the two. "I think that is really why we are on the same page and why we take care of what we have now. We work hard, we love what we do, and there is a sense of us having to prove ourselves," she explains. "We really do help each other out, because we have so many dreams. That is why we back each other up as much as we can."

Their latest movie is called I Love You, Hater and they got to work with media darling Kris Aquino for the project. "She is so much fun. There's always so much chika, and there is always food on the set," Julia gushes. Joshua nods in agreement, especially on the part about food. 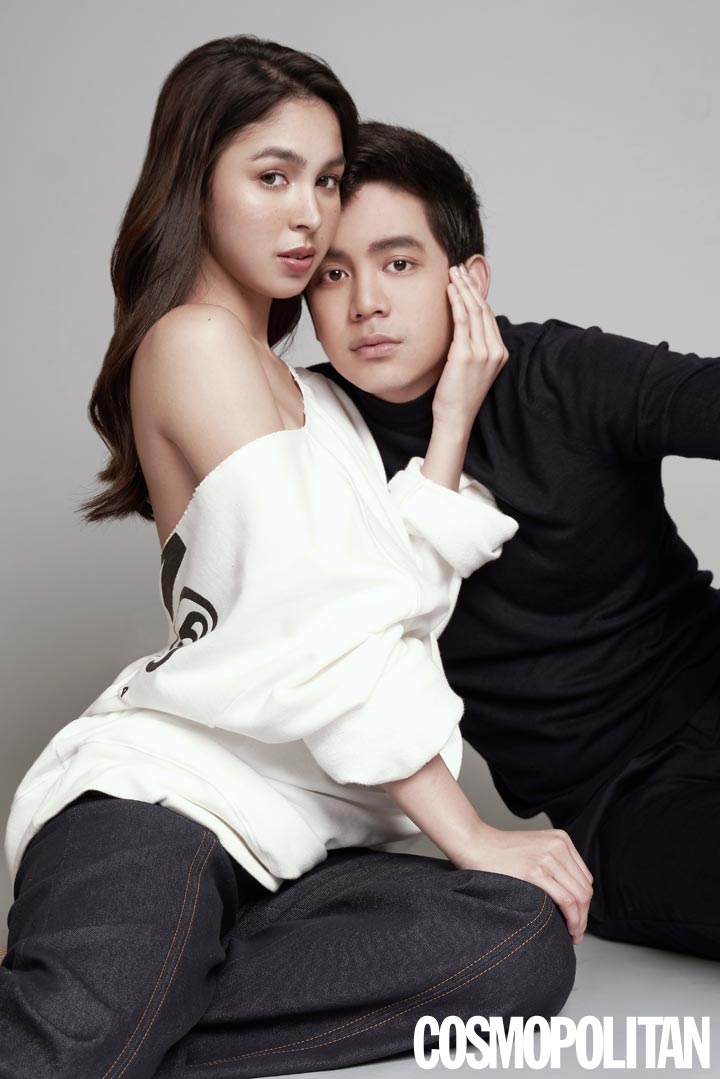 In response, Julia says that she has her comments section turned off so she doesn't get to read negative things from other people. When talking about bashers, she muses, "I think they should not put their anger within themselves on other people, and use social media as an outlet for their hate. If you are angry at yourself or jealous of someone else, focus na lang on your life and improve on it."

Despite all the negativity thrown at her and her pairing with Joshua, Julia keeps a positive outlook on life. She ends the conversation with some words of well-learned wisdom: "Wouldn't it be nicer if everyone would just support each other and lift each other up instead of putting out so much negative energy online? If you are being bullied, I would advise you to discover and know yourself well. It will help you to stand your ground with the knowledge that what they are saying is not true. Be confident, love yourself, and don't stray from your values. This way, you won't be affected by anything negative that they say."