Daniel Matsunaga And Erich Gonzales Couple Up In New York

1 Lovers Daniel Matsunaga and Erich Gonzales, along with Daniel’s mother (how cute!), have jetted off to New York to celebrate Daniel’s birthday. The couple went on an outdoorsy trip at the Bear Mountain State Park and played with the winter snow and autumn leaves, and just basically basked in all their love!

Erich even wrote a feelsy birthday message to her main man. Stay in love, you two! XOXO

3 Is a Taylor Swift show already in the works? YOU BET. Teaming up with telco giant AT&T and their streaming service, DirecTV Now, a promo clip was released featuring never-before-seen footage of Tay Tay’s rise to superstardom. Are you ready for #TaylorSwiftNow? WE SO ARE. (Just Jared)

.@TaylorSwift13 fans have a new destination for unique and never seen videos, #TaylorSwiftNOW – coming soon, only on AT&T. pic.twitter.com/PY8FxiMddK

4 Leave it to Cara Delevingne to get a whole room full of people at the famous Chateau Marmont, no less, to do a mannequin challenge! The actress-model is seen frozen atop a table while actor Jesse Eisenberg makes a cameo lighting a cigarette. This vid is summed up in one word: Awesome. (Refinery29)

5 Disney’s much-anticipated CG-animated film, Moana, finally hits Philippine theaters tomorrow, November 30! Voiced by newbie Auli'i Cravalho as Moana and Dwayne Johnson as the demi god Maui, the film tells the story about a brave young girl who finds herself when she sets off on an adventure of a lifetime. 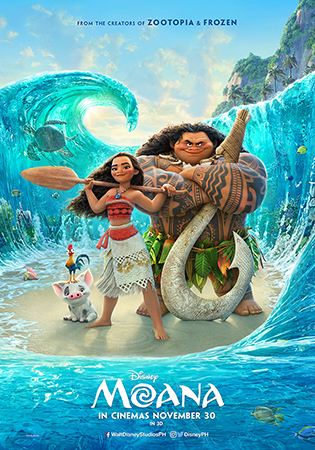