A section of American comedienne Issa Rae's 2015 book, The Misadventures of Awkward Black Girl, is making the rounds on social media for being non-too-complimentary about Filipinos.

Issa, however, singles out Filipinos in her book, saying, "And I'm not talking about Filipinos; they're the blacks of Asians."

Actor Enchong Dee expressed his disappointment on Instagram Stories and responded to the issue. "[A] famous black woman says not to date Filipino men because they're the 'Blacks of Asians.' Welcome to 2018 everyone," he said. "Just when you thought humanity is getting better." 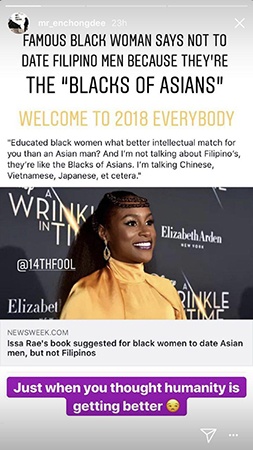 This also drew ire from Twitter users finding the passage offensive to not only black men but also Filipinos.