This stunning vocalist has been so successful on TV that it's hard to believe she's only 18. Get an exclusive peek behind the scenes of her Fun, Fearless Female Awards shoot!
by CJ de los Santos | May 20, 2011
Post a Comment
Featured 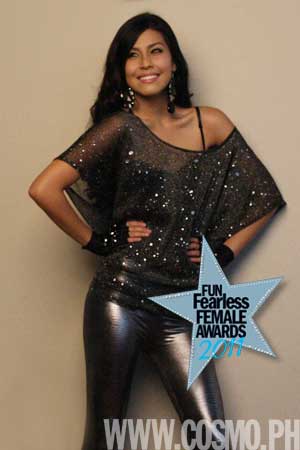 When Frencheska Farr joined Are You The Next Big Star? in 2009, she was one of the youngest contestants vying for a chance to wow the nation with her voice, at 16. She showcased her powerful pipes with covers of Christina Aguilera, Michael Jackson, and Whitney Houston songs, winning over the hearts of the judges—and the voting public. She eventually won the competition alongside Geoff Taylor, and proved that she is one to watch for.

Last year, this Stellar Singer revealed that she's got more than just a pretty face and striking voice, but she has acting talent as well! In addition to releasing her debut album, Inside My Heart, she also broke into the film scene as the OFW Amelia in last year's  critically-acclaimed musical drama Emir. Now 18, she is gaining more and more attention for her performances. She's currently seen on GMA-7's Party Pilipinas and superhero teledrama Captain Barbell, alongside Richard Gutierrez.

Frencheska is an inspiration to us all on the rewards of perseverance and dreaming big. We met her at her Fun, Fearless Female shoot and the Awards Night, and she talked to us about how her life has changed since winning the competition. Watch for her behind-the-scenes and interview video on CosmoTV soon, and launch the gallery to see behind-the-scenes photos.