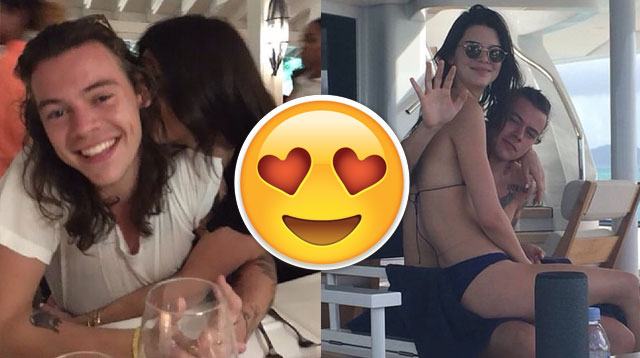 One Direction singer Harry Styles has fallen victim to a hacker who leaked his private vacation photos with Kendall Jenner online.

Images of the 22-year-old singer started to appear on Twitter on Saturday after his mom Anne's iCloud account was allegedly hacked by a fan.

Many of the shots include supermodel and reality TV star Kendall Jenner, 20, who went with the singer to St. Barts over Christmas, sparking reconciliation rumors at the time.

The couple had originally dated in 2013, and the pictures from the private account show a more intimate side to the pair than has ever been seen before.

A number of the 30 pictures show Kendall sitting on Harry's lap and draping her other arm around his shoulder as he rests his hands on her back.

Another shows the pair in a bathroom, with Harry taking the shot through the mirror with a professional camera as Kendall smiles next to him.

There are at least a dozen photographs of Harry with his beloved mother Anne, 48, and one shot shows him enjoying some family down time as he hugs his step-dad Robin.

A representative for Harry or his mom has yet to comment on the leaked photos.