This fresh-faced young actress has the perfect balance of beauty and brains to make it big in showbiz. Find out why she's one of our Fun, Fearless Female Awardees for 2012!
by CJ de los Santos | May 31, 2012
Post a Comment
Featured 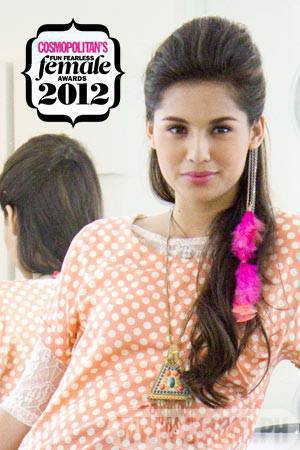 At only 18 years old, Jasmine Curtis-Smith is the youngest of our Fun, Fearless Female Awardees for 2012, but she's well on her way to becoming the next big thing. We first knew of this Fil-Aussie as the younger sis of May 2012 cover girl and two-time Fun, Fearless Female Awardee Anne Curtis, but in just a few short years, Jasmine has already established herself as a household name in her own right.

Last year, she made her debut as TV5's Primetime Princess when she starred opposite JC De Vera in the high-profile remake of Ang Utol Kong Hoodlum. The show was partly shot in Australia, where Jasmine is currently continuing her education.

Jetsetting to the Philippines to film during school breaks seems to be working for the actress, since she also headlined the Twitter-trending Nandito Ako early this year with no less than American Idol alum David Archuleta as her leading man!

We admire her commitment to complete her studies and can't wait to see what else is in store for her showbiz career. One thing is certain: The future is bright for this rising star.