Jay R On His New Image, New Album, And That 2004 Cosmo Centerfold Cover

The once-skinhead R&B hottie returns to the spotlight. Get to know him all over again!
by Cheekie Albay | Apr 23, 2010
Post a Comment
Featured 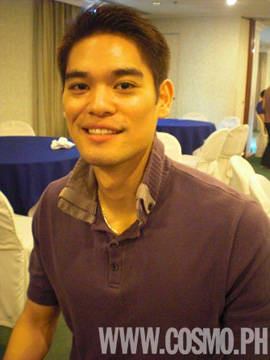 We loved him with his shirt off, his hair shaved, and a baseball cap perched sideways on his head, but we've got to admit, he looks damn hot all covered up, too! Jay R, once dubbed the Philippines' Prince of R&B, is back--with a new moniker, the Platinum Prince of Soul, and a sleek new look to boot.

Cosmo caught up with the crooning cutie to ask him about his sleek new look, his romantic new release, his beauty queen lady love, his summer plans...and his pre-makeover 2004 Cosmo Centerfold cover!


We like your hair. Why did you decide to grow it back?

I've been bald in the industry for seven years now. It's time for a new look. Universal Records recommended na siguro kailangan magbagong look for the new album, which is a 180-degree turn from what I used to do because it's all Tagalog.


Does that mean we won't be seeing you topless anymore in the future?

It's hard not to see me topless because I'm endorsing Bench Body (laughs).


You used to be called the Philippines' Prince of R&B. Now you've got a new moniker, the Platinum Prince of Soul. What else are you a prince of?


Was there a song you wanted to cover but didn't make it to Jay R Sings OPM Love Classics?


If your girlfriend, Bb. Pilipinas-International 2010 Krissa Mae Arrieta, were a song, what would she be?

She would be the song "Beautiful" by James Blunt.


Where are you headed this summer?

I'm going to Singapore and Malaysia for a cruise.


What's your theme song for summer?


What do you think of DJ Tony Toni of Magic 89.9's Boys' Night Out copying your 2004 Cosmo Centerfold look in Cosmo's September 2009 issue?

It's nice! They say that we look alike. And we look exactly alike there (laughs).


Whatever happened to those green apples nestled in your crotch? Did anyone take them home?