Meet the Fun, Fearless Female Awardee who's conquering both radio and television airwaves with her charming personality and girl-next-door appeal.
by CJ de los Santos | May 9, 2012
Post a Comment
Featured 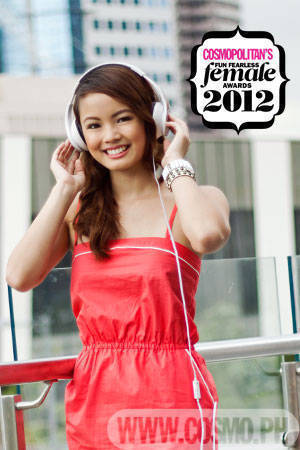 There was once a time when working in radio was a faceless profession. But today, many radio personalities have broken free of the booth to explore the other exciting projects that the world of mass media has to offer. Case in point: Magic 89.9's Jessica Mendoza.

This 23-year-old disc jockey is famous for her radio show Top 5 at 5, which she hosts alongside last year's Fun, Fearless Female Awardee Andi Manzano. Like Andi, Jessica has branched out into other related endeavors, such as VJing, event hosting, and even acting in music videos. She's also earned quite a following in the sports community, thanks to her experience as a courtside reporter for the UAAP and AKTV.

We met up with the fresh-faced young woman at Bonifacio High Street for her Fun, Fearless Female Awards 2012 pictorial, in which she filled us in on the DJ side of her career. We're sure it won't be long before this charming and ambitious Cosmo girl conquers other media outlets, too!


Launch the gallery to see behind-the-scenes photos from our shoot with Jessica Mendoza!

To see the rest of the Fun, Fearless Female Awardees, grab the May 2012 issue of Cosmopolitan Magazine with ANNE CURTIS on the cover, in stands NOW! Virtually flip through our online teaser of this Collector's Edition!