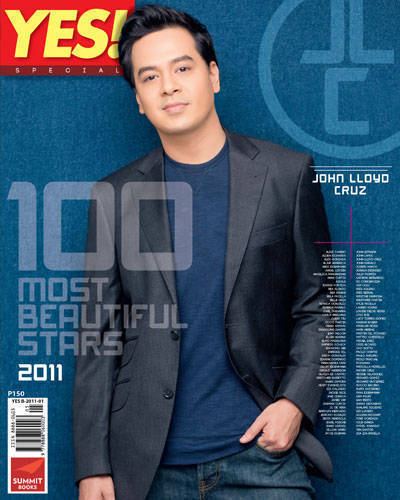 What makes a person beautiful? We all have our own opinions on who and what is beautiful, but every now and then, it's nice to pay tribute to those we feel are the most beautiful people we look up to.

Cosmo's sister publication YES! Magazine recently revealed the results of this year's 100 Most Beautiful Stars special, and the top notcher may surprise you. For the first time, the entertainment magazine chose a male as its cover model. As you can see on the cover, the number one spot goes to the Box Office King himself, John Lloyd Cruz!

John Lloyd attended the presscon held at the Crowne Plaza Hotel, where YES! editor-in-chief Jo-Ann Maglipon unveiled the cover to a flurry of media representatives. The 28-year-old actor (who's been in showbiz for 14 years already!) humbly downplayed the honor, saying that he's merely "cute," but we Pinays beg to differ.

Nonetheless, John Lloyd's acceptance of the title "Most Beautiful" is a landmark in the industry, as men usually prefer more masculine accolades. In the first four years of the magazine's special edition, ladies have dominated the top spot (all are former Cosmo cover girls, by the way): Judy Ann Santos in 2007, KC Concepcion in 2008, Marian Rivera in 2009, and Kim Chiu last year. It just goes to show that beauty is more than just an adjective used to physically describe women; it is also something that can apply to a person's inner attractiveness.

Launch the gallery to see photos of all these stars at the event!

Grab a copy of YES! Magazine's 100 Most Beautiful Stars special, in stands now.