Jojo Alejar: On The Highs And Lows Of Being A Funny Man

The Jojo A, All The Way host talks about comparisons to American late-night kings and using his sense of humor to score with chicks.
by Cheekie Albay | Jan 21, 2010
Post a Comment 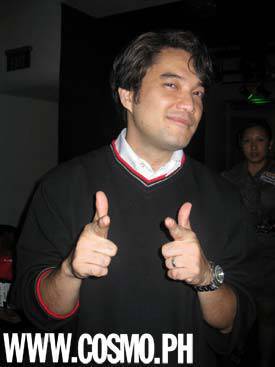 He’s been accused of imitating American late-night kings Conan O’Brien, David Letterman, and Jay Leno, but Jojo Alejar couldn't care less about such put-downs. He’s quick to admit that the late-night greats have really influenced his work, and like them, he also hopes to be in this career for the looong haul (or maybe until someone else kicks him out of his spot).

After years of getting flak for his cheesy jokes and subversive production style, the Jojo A, All The Way host is still standing, sitting pretty as TV5’s lone late-night lord. And he's still dishing out those corny comical acts that might have turned off some haters, but at the same time, have gained him a loyal cult following through the years.

Cosmo got to powwow with the That’s Entertainment alum and ask him about his flirting tactics, his hidden talent, and his reaction to those folks who brand him as just a Conan wannabe.

Are you always this funny, or is this just your on-screen persona?

Gemini kasi ako e. No shades of grey in between ako. Kung saya, saya talaga; 'pag seryoso, seryoso. May time when I was working in Congress, ‘pag work time, work time. ‘Pag funny, funny talaga. Pero [in Jojo A, All The Way], I need to be funny all the time, so mas masaya.

Have you ever used humor to get a girl’s attention?

I always do something unexpected. For instance, those pickup lines na they always say sobrang baduy, I use them! Like, “Hey, excuse me, I saw you somewhere last night. Oh sorry, I was asleep then. Maybe it was just a dream.” But it works!

Complete the sentence: The problem with being a comedian is _________.

What do you have to say to people who say you’re just imitating Leno, Letterman, and Conan?

You are such good observers! It’s okay. At least my show is not dubbed in Filipino, but instead it’s a show talaga for Filipinos, with our own issues and our own humor.
Continue reading below ↓
Recommended Videos
Read more stories about