Kiefer Ravena Has The Sweetest Birthday Message For Alyssa Valdez

On Instagram yesterday, June 29, Kiefer Ravena expressed his heartfelt gratitude and love to his girlfriend, Alyssa Valdez, for her 25th birthday.

The message reads, “You stuck with me through thick and thin. You deserve nothing but the best. Maraming nagmamahal sa 'yo at sumosuporta sa 'yo. Mapa-golf, -volleyball o buhay man yan. Keep inspiring a lot of people. You have a smile that can light up the world. Happy Birthday, Phenom. I love you.”

Alyssa has been dubbed “phenom” due to her phenomenal skills in volleyball.

For sure, the couple has been through some tough times. On May 28, Kiefer got an 18-month suspension due to a failed drug test, which he blamed on a pre-workout drink. Alyssa was on Kiefer’s side during that whole ordeal.

Kiefer also got into a controversy in 2017; he was threatened to pay someone for not leaking nude photos of him.

On Alyssa’s Instagram stories, she also posted the handwritten note Kiefer had given her. The volleyball star fondly called her boyfriend, “sungit.” 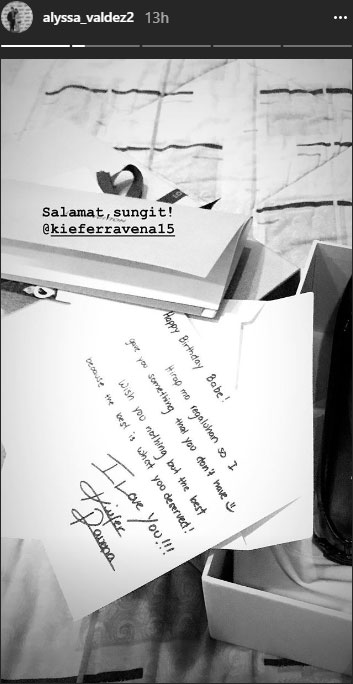 Kiefer’s handwritten note reads, “Happy Birthday, Babe! Hirap mo regaluhan so I gave you something that you don’t have. Wish you nothing but the best because the best is what you deserve.” He ended his note with, “I love you!!!”