Kim Kardashian just released three Kimoji Heart fragrances titled Bae, Ride or Die, and BFF as a part of her KKW cosmetics line. The fragrances, which come in heart-shaped boxes, are color-coded, with blue for Bae, purple for Ride or Die, and pink for BFF. Seems simple, right?

Not simple. In addition to announcing the fragrances, Kim Snapchatted an image of a color-coded Post-It Note grid with celebrity names, allegedly forming a list of which big celebrities received which fragrance sent directly from Kim—there are some names you would expect like Kendall Jenner (she's BFF pink), Cardi B (Ride or Die purple)... but there's something different about the blue list. Namely, it's 100 percent people who Kim has beefed with in the past. 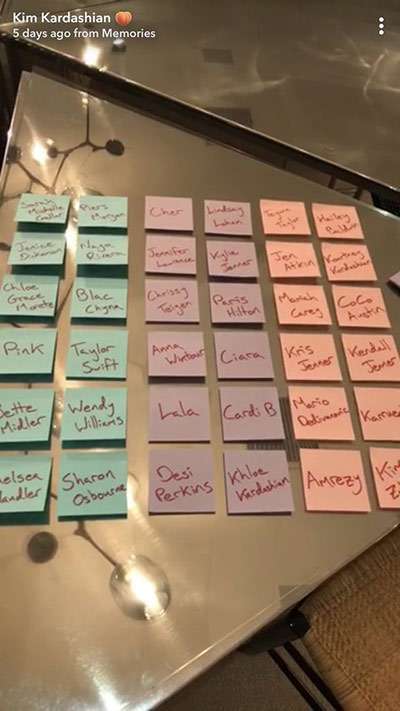 Kim explained in a video on her Snapchat, saying "I'm going to send [my fragrance] to my lovers, to my haters, to everyone that I think of, because it's Valentine's day after all," but that doesn't explain why she chose Bae as the designated scent for haters (full disclosure, the Cosmo.com office received a blue chocolate heart as part of a promotion for the perfume line and I'd be lying if I said my feelings weren't hurt. What did I do, Kim? Are we cool? I'm scared).

Anyway, here's why the other people on the blue list are there.

Sarah Michelle Gellar: Publicly claimed to cancel her Vogue subscription after Kim and Kanye were featured on the cover.

Piers Morgan: He's just mean to her all the time, most recently slamming her for her nipple-blurred images on Instagram.

Naya Rivera: She criticized Kim for the famous "Break the Internet" Paper magazine shoot, the one where Kim got her butt out and, to be fair, broke the internet.

Chloe Grace Moretz: She criticized Kim posting nude photos by tweeting "I truly hope you realize how important setting goals are for young women, teaching them we have so much more to offer than just our bodies."

Blac Chyna: The easier question is why Kim wouldn't be angry with Chyna, who has a notoriously tumultuous relationship with Kim's brother Rob and was allegedly beefing with Kylie when she started dating Chyna's ex Tyga.

Pink: She posted a note on Twitter that heavily alluded to Kim's nude selfies being a bad influence on young women.

Taylor Swift: Haha. Oh god. So much. I can't even look at a snake emoji without flashing back to the great Kimye/Swift feud of 2016. There's a summary here, I can't. I'm sorry.

Bette Midler: Famously tweeted "Kim Kardashian tweeted a nude selfie today. If Kim wants us to see a part of her we’ve never seen, she’s gonna have to swallow the camera."

Chelsea Handler: She often uses Kim and her family as the butt of her jokes. Some of the jokes are literally about their butts.

Kim kind of cleared the air on Twitter claiming that not every blue box went to a hater, but still: Kim...whatever it was, I'm sorry.