1. The reason behind Liza Soberano and Enrique Gil's viral photo at the ABS-CBN Ball

Liza Soberano's gorgeous portrait with Enrique Gil isn't the only ABS-CBN Ball photo of the couple that made waves online. A particular picture of them seated at the table also went viral because of Liza's pissed AF face at Quen! Here's the original pic, taken by photographer Johnny delos Santos:

Liza went on the comments section and gave the real reason behind the meme-able photo: "Omg! Quen accidentally spilled his champagne on me. That explains this face haha." 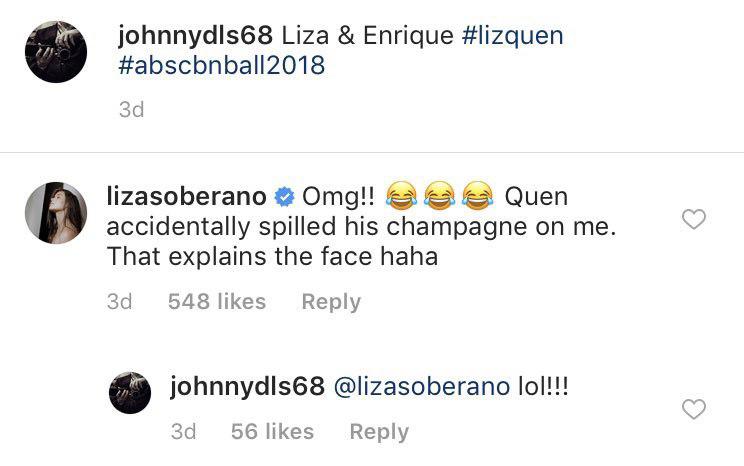 Pia Wurtzbach stunned everyone by going tan for the ABS-CBN Ball. While her look drew polarizing comments online, one particular Instagram user went as far as throwing a racist comment at her. "Morena ka na nga nagpa-tan ka pa? 'Di ko gets. Nagmukha ka tuloy African American," the user wrote on one of her Ball posts. Queen P stayed true to her ~classy~ ways and simply replied with, "And what's wrong with that?"

KC Concepcion shared a PDA-filled photo of her French boyfriend Pierre-Emmanuel Plassart by the Seine river. KC clarified in the comments section that the pic was taken during her recent trip to Paris for her boyfriend's birthday. (PEP.ph)

Our '00s fangirling hearts are beating as one! The OC's Mischa Barton announced on Instagram that she's officially part of The Hills reboot. "The secret’s out...I'm joining the cast of The Hills. When MTV approached me with the chance to be a part of the reality show that was inspired by The OC, it felt like the perfect opportunity for an irresistibly inviting new chapter," she wrote.

It's still unclear why she's joining the reality show but let's just wait for 2019 when The Hills: New Beginnings is set to premiere. (Cosmopolitan.com)