1 There's another "It Girl" wedding to look forward to because Martine Cajucom, one of the co-owners of Sunnies Studio and one of the Diaz cousins (Belle Daza, Georgina Wilson, and Jess Wilson), got engaged to Cliff Ho. He popped the question while they were on vacation at Alila Villas Uluwatu, Indonesia. 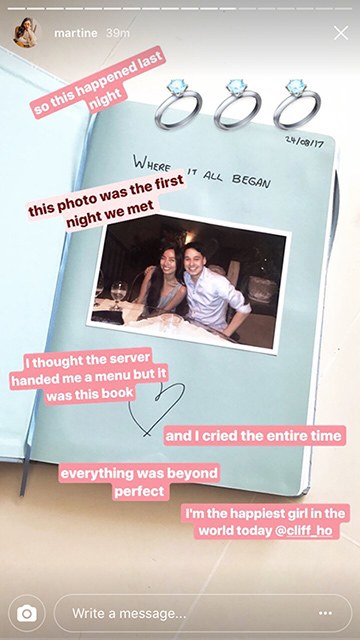 2 Did Liza Soberano go through puberty? A viral photo of her has been spreading online which seems to have been taken during a school dance or party. Although she looked very young, her delicate features could already be seen. Ikaw na, girl. [Push]

3 Kamikaze announced their hiatus in January 2015, and after three years of absence, the band revealed that they will drop a new album on December 9. Jay Contreras, the lead singer, posted a teaser on his Instagram account. [ABS-CBN]

4 In the sixth episode of Game of Thrones' Season 7, Daenarys Targaryen (Emily Clarke) and Jon Snow (Kit Harrington) shared a few seconds of possible ~sexual~ tension in one scene.

This drove GoT fans berserk because Dany may be Jon's aunt (incest!). Alan Taylor, director of confirmed that the two will indeed be each other's love interest in the future.

He told Daily Beast, "Readers of the book have known that things were heading towards this destination for a while. Even the characters in this story know it's heading in this direction. Tyrion is making fun of Dany about what's brewing. So we knew it's got to come at some point, and I was glad that I got to be there for a major step forward for them." [Daily Beast]


5 We got excited when Taylor Swift released teasers of her new album Reputation, and fans speculated that the singer might have a surprise performance at the MTV Video Music Awards. Unfortunately, it's far from happening.

Jesse Ignjatovic, one of the executive producers of the VMAs confirmed this in his interview with People. "She has been on the show many times and [has] performed with a new album coming, but not this time,” he said. “I definitely wish she was coming on and performing." [People]