Even Catriona herself wants Maymay to star in it!
by Lily Grace Tabanera | Feb 20, 2019
Post a Comment
Featured

On February 18, Maymay Entrata met with shoe designer Jojo Bragais, the same person who created Miss Universe 2018 Catriona Gray's heels when she won the crown! The designer posted a photo of them together, saying, "It was nice seeing you again @maymay! Aliw na aliw pa din ako sayo!"

Fans went wild in the comments, speculating whether Maymay will be playing the beauty queen for an episode of the long-running show Maalaala Mo Kaya. On an interview with PUSH in July 2018, Catriona even said that if there's one person she'd love to be portrayed by on TV, it would be none other than Maymay! "She's kind of a goofball, a little bit like me," Cat said.

After that interview, Cat also defended Maymay on Twitter from backlash, saying, "What's there to be negative about? I've met Maymay and she's so sweet and humble in person." 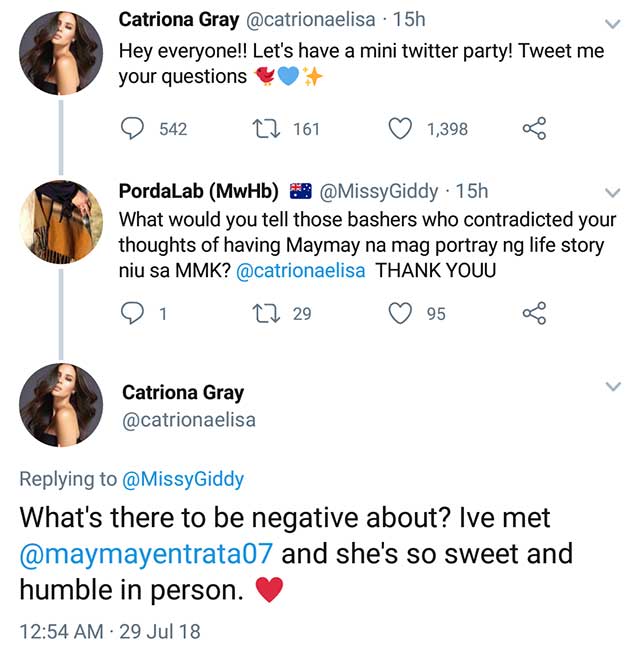 If this episode is going to happen, it won't be the first time a Miss Universe has been featured on the show, since Liza Soberano also played the role of Pia Wurtzbach on June 3, 2017! And while we're waiting for confirmation about this ~possible~ MMK episode, here's a vid of Maymay doing her own adorable version of Cat's slow-mo turn:

Catriona, who is now based in New York, has returned to the Philippines for her homecoming parade which will be held on Thursday, February 21, 2019. Stay tuned for updates!