You'll surely be spurred to get in shape when you read how this Fun, Fearless Female Awardee promotes her athletic lifestyle.
by CJ de los Santos | May 28, 2012
Post a Comment 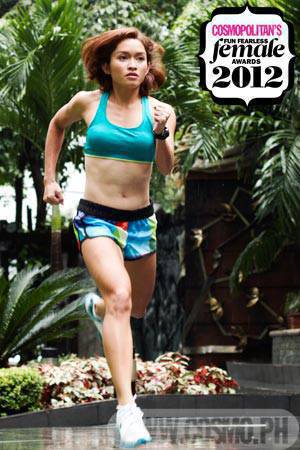 We all want to get fit and stay fit, but not all of us have the determination nor the motivation to jump headfirst into the world of athletics. Lucky for us, champion triathlete Monica Torres seeks to inspire women everywhere to find their sport and give their bodies the workout they deserve.

Monica is the three-time champion of the Cobra Ironman 70.3 Philippines, Filipina Elite division, and the highest-ranked duathlete in the country (in 2010, she ranked fourth in the world!). She's proven herself to be a champion in the sports scene, but rather than resting on her laurels, Monica uses her expertise and sports clout to promote fitness to anyone interested in getting in shape.

Along with two other triathlete friends, Monica started 3 Is Greater Than 1, a website filled with valuable news, information, and updates on local races. She is also currently heading the running clinic of our sister magazine Runner's World, teaching runners of all levels how to maximize their skills.

We photographed Monica at the Ortigas Park for her Fun, Fearless Female Awards 2012 shoot, where showed off her tireless spirit as we shot frame after frame in the pouring rain! Launch the gallery to see behind-the-scenes photos from our shoot with Monica Torres!