Nash Aguas, 20, is now a proud owner of a house in Las Vegas, Nevada, in the US.

The young actor posted about his recent property investment on Instagram last week.

In the photo, Nash was all smiles while holding the document of ownership. He wrote in the caption, "Finally, this house is officially and legally mine!!!! Thank You po!"

Nash posted another photo showing the neighborhood of his new property.

A number of celebrities congratulated the ABS-CBN actor.

One of them was former actress Neri Miranda who raved about Nash being a good example to young people when it comes to handling money.

She mentioned in the caption that Nash also has a number of other investments apart from the house.

In the comments section, Nash and Neri exchanged replies with the actor revealing how he was able to purchase the US property. 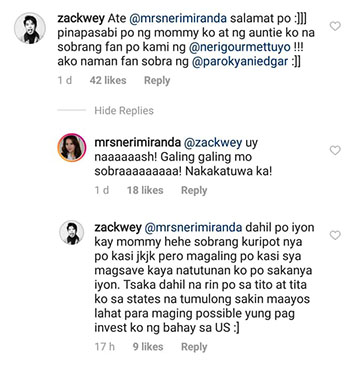 At five years old, Nash started in showbiz when he joined a kiddie talent search in the now-defunct ABS-CBN noon-time show, MTB or Magandang Tanghali Bayan.

In 2004, at age six, he joined the Kapamilya kiddie talent show Star Circle Quest, where he won the title Grand Kid Questor.

He then became part of the long-running kiddie gag show Goin' Bulilit, which paved the way for him to become a child star.