President Noynoy Aquino declared a state of national calamity in the Philippines during a nationwide live TV broadcast last night (November 11, 2013). He also assured Filipinos that the government is doing everything in its power to help those affected. (Inquirer.net)

CNN news anchor Anderson Cooper is in Manila to do a special live coverage of the aftermath of Typhoon Yolanda (international name: Typhoon Haiyan). (interaksyon.com) 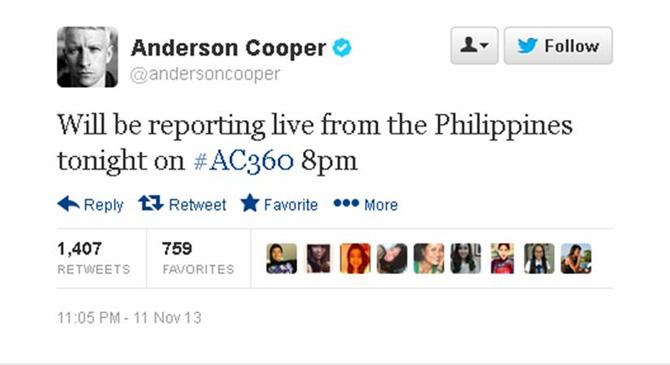 Oh, Miley. The controversial singer raised eyebrows again during the MTV European Music Awards after lighting up what appeared to be a joint onstage and smoking it with comedian Will Ferrel. (Full story here!)

No hard feelings for Piolo Pascual. The actor was asked how he feels about his ex-girlfriend KC Concepcion's love life (she is currently dating, albeit not exclusively, Paulo Avelino) and he had nothing but kind words for his former flame. He said, "I’m happy for her, you know? Ganoon naman dapat talaga ang buhay. We want to be happy for everyone." Piolo is reportedly pursung his On The Job co-star, Shaina Magdayao. (PEP.ph)

The miracle birth of a baby girl amidst the chaos of Typhoon Yolanda brings hope and cheer to the citizens of Tacloban. (Philstar) It's not too late to help out! You can volunteer and send goods to these donation centers or participate in the different causes of these establishments. All profits are for the benefit of the typhoon victims.