It was reportedly a joke that started this "cold war."
by Dinno Erece | Oct 7, 2009
Post a Comment 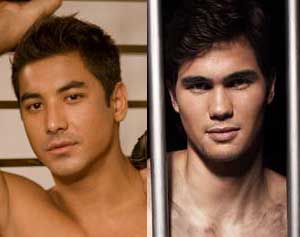 The GMA-7 waiting room became a war room for Phil Younghusband and his female manager last Monday afternoon, while the special birthday episode of Grace Lee, one of Lucy Torres-Gomez’s co-hosts in Q Channel 11’s A Sweet Life, was being taped. And this is reportedly because of a joke concerning Akihiro Sato.

It’s not only their recent stint as 2009 Cosmo Men supplement Centerfolds that these two have in common. Fil-Brit soccer player/model Phil was a Celebrity Duets Season Two finalist; incidentally, Brapanese model Aki is now one of the contenders in the third season of the same GMA-7 franchised reality show. Now, what could have come between the two? It’s rumored to be Phil’s beauteous manager who has been playfully linked to Akihiro.

Last Monday, while waiting for their cue in A Sweet Life, Akihiro’s handler, who was also inside the same waiting room, asked Phil's manager if she can vote for Akihiro in Celebrity Duets, and she in turn teased the handler, saying she is willing to give 1,000 votes to Aki if she knows what’s in it for her. This joke reportedly upset Phil, who walked out of the set and even threatened to take a cab home.

Could it just be a minor case of manager-talent tampuhan?