Rabiya Mateo has just finished competing in the 69th edition of Miss Universe, which was held on May 16, 2021, Sunday (May 17 in the Philippines). The Ilongga beauty queen managed to get into the competition's Top 21 but failed to get into the Top 10.

On May 17 in the U.S., Rabiya got real and said in her Instagram Stories, "Gusto ko na mag-samgyup." LOL! So cute.

According to ABS-CBN reporter MJ Felipe, Rabiya was invited to a send-off lunch hosted by a Filipino restaurateur in Florida.

In one of Rabiya's IG Stories, it looked like she was holding a bag of chicharon (na may laman). Yum!

"Feels like home," she captioned her IG Story, tagging the Pinoy restaurant. 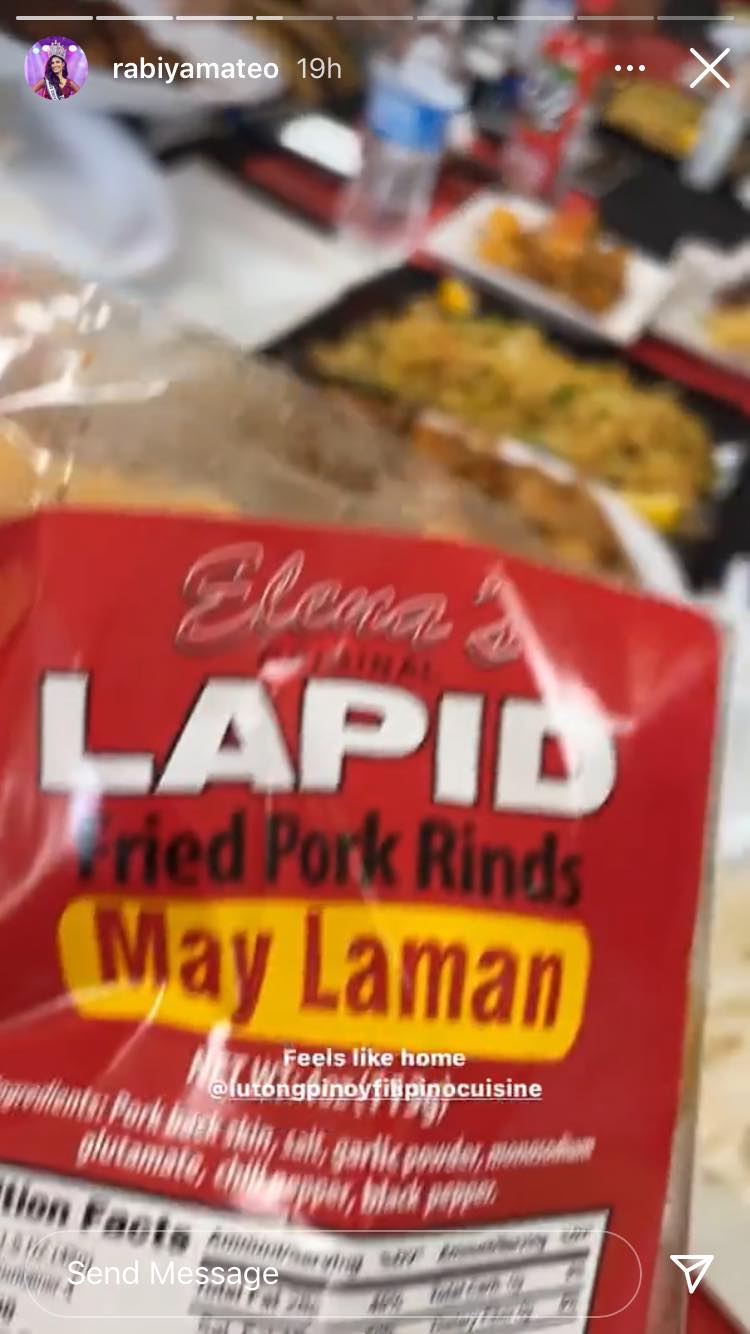 While preparing for the pageant, Rabiya trained under John Cuay, the same fitness trainer who has also worked with Pia Wurtzbach. Their training sessions last for two hours, and they would train three to four times a week. Wow.

Nutrition director Cristy Marasigan, meanwhile, designed a protein-rich diet under 1,600 to 1,700 calories a day to help Rabiya gain muscle mass. Rabiya said she would eat a lot of beef, chicken, and pork, along with a lot of fruits and vegetables.

In a series of Instagram posts, Rabiya shared her pride in representing the Philippines. She also opened up about the challenges she endured, including keeping healthy and maintaining her physique, leading up to the competition.

"It was such a beautiful moment to represent you, Philippines. I am forever honored to be part of the legacy, of our history. In my heart, I did everything I can. I trained really hard to be physically fit. I would have sleepless nights trying to read articles to be updated. I made a lot of sacrifices people can't sometimes see. Early call time. Late-night rest. Trying to be sane and motivated. It was a challenge, but it made me so much stronger every day."

She also revealed how crushed she was when she didn't make it to the Top 10. The 24-year-old beauty queen said she might take a short break from social media, and then consider pursuing opportunities in showbiz.

We're still so proud of you, Rabiya!