1 Following yesterday's flood of nude celeb photos, an anoymous user on image-sharing forum 4chan said that he also holds several videos of JLaw engaged in sexual acts. The person also said that he or she will post the videos in return for PayPal donations and has even already posted a PayPal email online which can be used to donate cash. The photos and videos are believed to have been accessed by hackers who breached Apple's security measures for its online storage system, iCloud. Other stars included in the nude photo leak include Ariana Grande, Kate Upton, and Mary E. Winstead. A spokesperson for Jennifer confirmed the authenticity of the photos and stated that they will be taking legal action against any website or media outlet that posts the images. (Pep.ph) 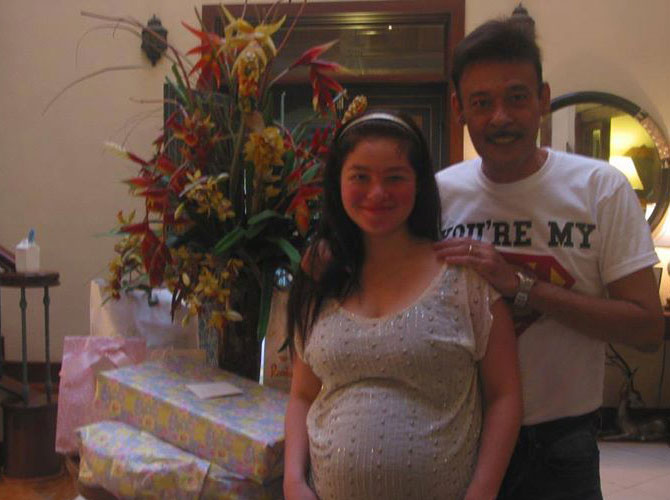 2 Actor Mark Gil died from liver cirrhosis at 52 years old. Mark's daughter, Andi Eigenmann, posted the photo above on her Facebook page with the caption, "The ever supportive dad who stood up with her daughter on one of the biggest trials of her life, RIP Sir Mark Gil, a great and loving father, a man of honor, a brilliant actor of Philippine Showbiz, you will be missed." (Pep.ph)

3 Wil and Kate went on an undercover train ride! How adorbs are the royal love birds? The two were caught going incognito while arriving in King's Cross station in London donned in casual clothes and eyeglasses. Earlier this month, it was also announced the William has been employed by the East Anglian Air Ambulance and will donate his full salary to charity! Check out the photos HERE. (JustJared)

4 Angelina Jolie wore her children's artworks on her wedding day! The stunning actress graced the cover of People magazine in her beautiful wedding gown that had embroided renditions of her kids' doodles on it. Luigi Massi, the master tailor at Atelier Versace, sewed dozens of designs onto the dress and veil. Brad on the other hand, had to borrow a tie from his son on the wedding day because he forgot to pack his. How cute is this family? (People.com)

5 Traveling any time soon? Be sure to arrive extra early at the airport as NAIA will tighten security after yesterday's bomb scare. Three men have been taken in by the authorities after their attempt to bring in improvised bombs on airport grounds yesterday. (GMA News)