After Song Joong Ki and Song Hye Kyo were spotted in Bali last month (where it looked like they were a tropical vacay together, but both their agencies denied that they even met up on the island), the Descendants of the Sun co-stars are confirmed to be in a relationship.

Both of the Korean superstars' talent agencies—Blossom Entertainment and United Artist Agency (UAA)—released a joint statement last night that the Song-Song couple have set the date of their wedding on October 31 this year. The statement reads:

"Hello. This is Blossom Entertainment and UAA.

"First of all, we give our thanks to the Korean and international fans who have shown a lot of interest in and love for Song Joong Ki and Song Hye Kyo. Also, we ask for your understanding as we convey this surprising news.

"Song Joong Ki and Song Hye Kyo will be holding a wedding ceremony on the final day of October, 2017. A marriage is not only a private matter but also a meeting between two families, so it was a delicate situation in many ways.

"There was no choice but to be cautious prior to marriage, and so we are at last conveying this message. We ask for everyone’s understanding.

"We ask for you to send the couple best wishes for their beautiful future together, and the two actors will be conveying the news to their fans separately. Thank you." [via Soompi]


Rumors about their relationship have been circulating ever since their hit K-drama ended last year. Months before their sighting in Bali, the two were spotted having dinner in New York City in March. At that time however, Song Joong Ki's rep denied any romantic relationship and that they met up as friends saying:

"This is the first time hearing about her scandal with Song Joong Ki. After confirming with Song Hye Kyo, she was on vacation in New York and Song Joong Ki happen to also be there. So, they had a meal together. Other friends were also there with them, including affiliates. We cannot believe it turned into a scandal." Sounds a tad bit familiar, no?

In June, they were also photographed having dinner out with their friends in Seoul, just one day after the 52nd Baeksang Arts Awards: 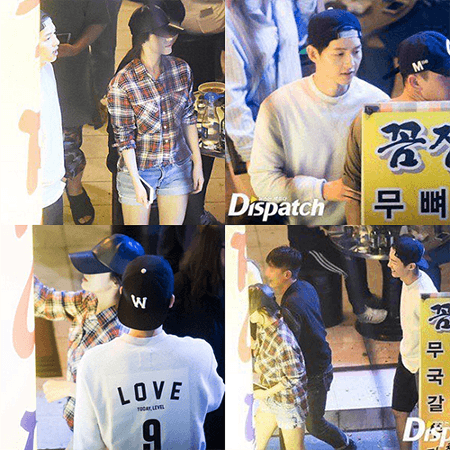 After months of being in a suuuper low-key relationship, we're just happy these two can ~freely~ exchange "I Dos" soon! Congrats, Song-Song!!! <3