Dream of having your own business one day? Be inspired by the success story of this young entrepreneur and Fun, Fearless Female Awardee!
by CJ de los Santos | May 23, 2012
Post a Comment 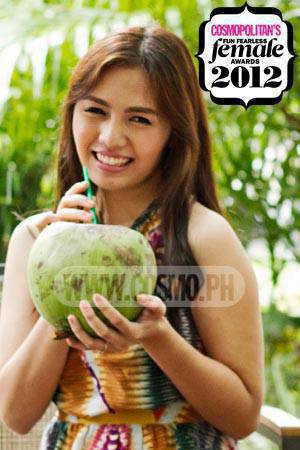 How many 25-year-olds can claim to have their own business? Being an entrepreneur is a tough job, primarily because you take a big risk when you start a company from scratch. But Fun, Fearless Female Awardee for 2012 Tamlin Manaloto had the guts and skills to pursue her goals and, as a result, she has achieved so much at her young age!

Her coconut beverage brand Coco Fresco was such a hit among health-conscious customers that it has expanded from a single cart business to a nationwide franchise worth P3.5 million--in just two years! We were so amazed by her success story that we wanted to meet her for ourselves, and we got to do just that when we invited her over to our office before her magazine shoot.

Launch the gallery to see photos from our shoot with Tamlin, which took place at the Ortigas Park. Watch out for her interview and video footage on CosmoTV!