Did you know she has always been afraid to attend Coachella?
by Wenn.com | Apr 20, 2016
Post a Comment
Featured 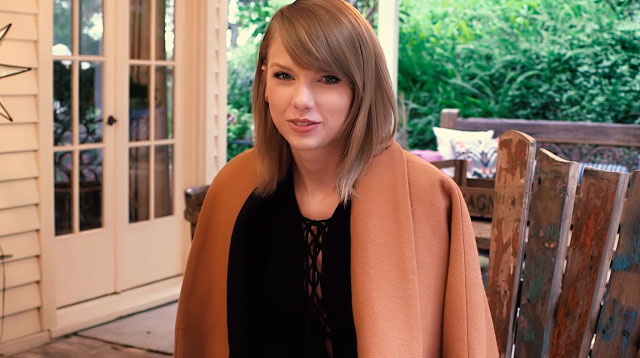 Taylor Swift has ticked off a major thing from her bucket list by attending the Coachella festival last weekend.

In a pre-Grammy Awards interview with Vogue.com, which has just been released as the website's latest 73 Questions segment, the pop star admitted she has always wanted to attend the desert festival but is too afraid to go.

That all changed over the weekend when she joined pals to support her boyfriend Calvin Harris, who closed the annual California music event on Sunday night.

It seemed she enjoyed the party so much, she dashed back from a friend's wedding to check out as much of Sunday's festival sets as possible.

In her 73 Questions video spot, during which she showed a curious Vogue reporter around her home, Taylor also confessed she loves coffee, chicken tenders, the TV show Friends, playing Scrabble, and the film Love Actually, while Kevin Hart always makes her laugh and her favorite cocktail is an unadventurous "vodka and Diet Coke."

She also raved about a beloved birthday cake, explaining, "It was from Milk Bar, it was my 25th birthday, and it was so good that even Jay Z raved about it."

She was also fond of boyfriend Calvin's Christmas gift, stating, "(He) planted an olive tree in my yard."

There was also a shout out to BFF Ed Sheeran when Taylor was asked about the one thing she still wanted to achieve.

"I really want an honorary doctorate degree, because Ed Sheeran has one and I feel like he looks down on me now, because I don't have one," she smiled.

The “Thinking Out Loud” singer received his honorary degree for his "outstanding contribution to music" from the University Campus Suffolk in Ipswich, England last year.