To celebrate Queen Elizabeth's recent birthday (She turned 91 on April 21!), here's a reminder of some of Her Majesty's funniest (and greatest) moments. 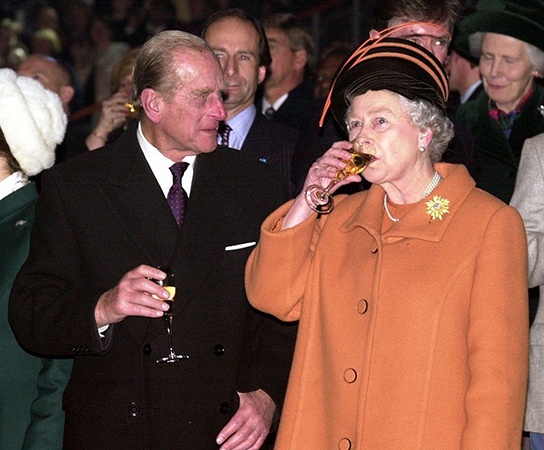 Back in 1999, the Queen and Prince Philip were asked to welcome in the new millennium during celebrations in London. When it comes to toasting the year ahead, apparently we share the same priorities as Her Majesty.

Continue reading below ↓
2. When Prince Harry passed his military training 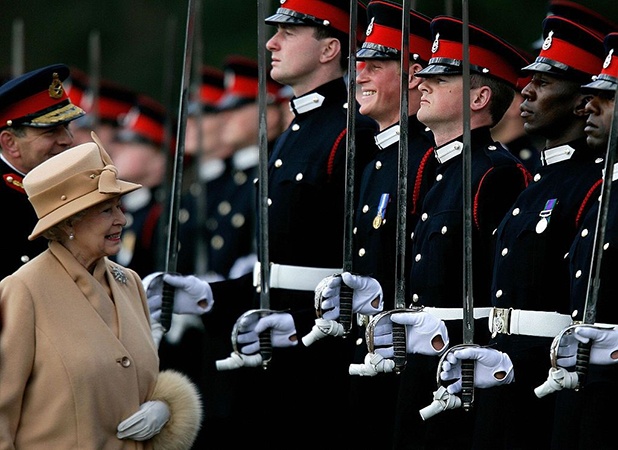 When the Queen inspected the passing-out Sovereign's Parade at Sandhurst in April 2006, there was one cadet who just couldn't keep a straight face. The monarch was no doubt beaming with pride as she walked past Prince Harry, who clearly found the sight of his grandmother inspecting his troop too much to handle.

For the opening ceremony of the 2012 Olympics, the Queen joined Daniel Craig for a Danny Boyle-directed film that appeared to show the queen jumping from a helicopter straight into the London stadium. In truth, ­it was a guy called Gary Connery who pulled off the breathtaking stunt, but that didn't stop the nation from enjoying Her Majesty showing off her playful side. Five years on, the clip has been watched almost 12 million times on YouTube.

4. When she politely declined to sit on the famous Iron Throne 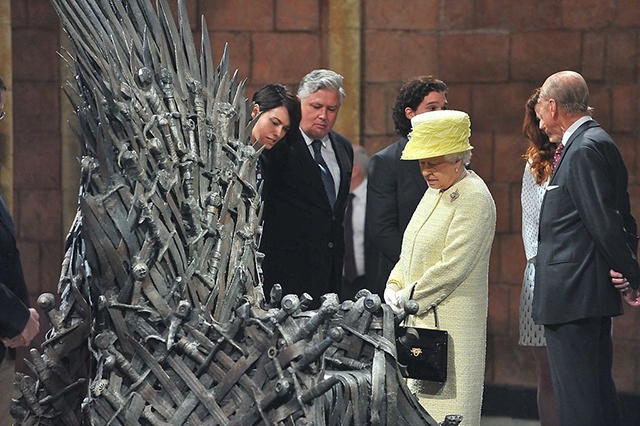 In June 2014, the Queen paid a visit to the set of Game of Thrones in Belfast. While the monarch got within inches of the show's famous Iron Throne, she didn't appear to be impressed by the chair, which is made of thousands of swords and definitely doesn't look comfortable. So, much to the disappointment of the show's producers, she turned down the chance to actually sit on it. "Apparently the Queen of England is not allowed to sit on a foreign throne," executive producer David Benioff explained during an interview with Late Night host Seth Meyers a year later. "This is an esoteric rule we didn't know about until that moment." Still, we're sure she appreciated the model version she was presented with at the end of her visit.

5. When she photobombed these Australian hockey players

Two Australian hockey players couldn't believe their luck when the most famous royal in the world popped up in the background of their selfie taken at the 2014 Commonwealth Games. And yes, as Jayde Taylor, who shared the image pointed out, the Queen even smiled for the camera. Something tells us she knew exactly what she was doing.

6. When she struggled to cut a cake at her local Women's Institute 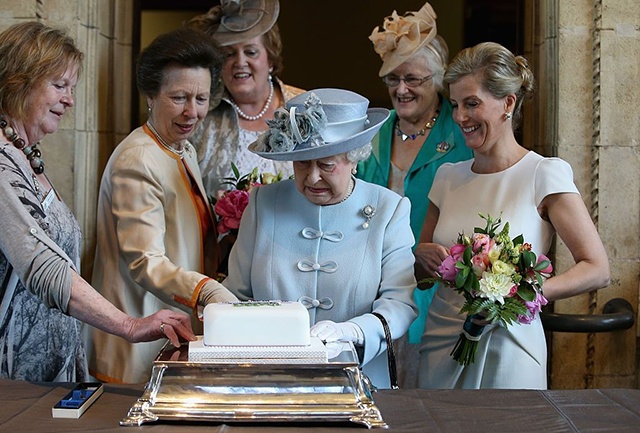 Among many other things, being the Queen involves a lot of cake-cutting. And sometimes, it doesn't go according to plan. In June 2015, she helped the Women's Institute celebrate its 100th year and was presented with a large fruit cake commemorating the event. After the Queen struggled to cut a slice, her daughter Princess Anne stepped in to help. It was a tense moment, one which the monarch reportedly said was "difficult," but HRH saw the funny side. Someone get her a better knife, next time.

7. When she put Justin Trudeau in his place 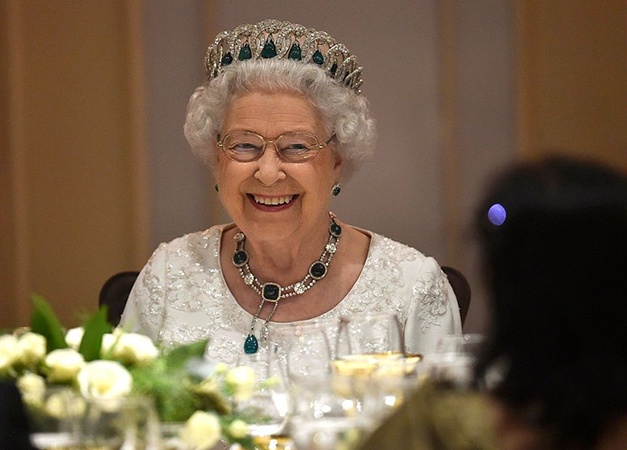 During a dinner in Malta, November 2015, Canadian Prime Minister Justin Trudeau detailed Queen Elizabeth II's long and full career and kindly pointed out he was the 12th Canadian prime minister to serve during Queen Elizabeth's 63 year reign. When she gave her own toast, the monarch quipped: "Thank you, Mr prime minister of Canada, for making me feel so old!" Trudeau later tweeted that the Queen is "forever young" in his eyes. Always a charmer.

8. When she gave the Obamas her "fighting talk" ahead of the Invictus Games

When Prince Harry shared a video to promote the 2016 Invictus Games, no one was expecting the Queen to appear in it. Turns out, she was the star of the show. The clip shows the royal pair watching a video sent from the White House in which Mrs. Obama tells them: "Hey Prince Harry, remember when you told us to bring it at the Invictus Games?" President Obama then chimes in: "Careful what you wish for," before his security staff say "boom" to the camera. But it's Harry and his grandmother who have the last laugh. "Oh, really. Please," says a smiling Queen. #MicDrop.

9. When she joked about being killed by a poisonous plant 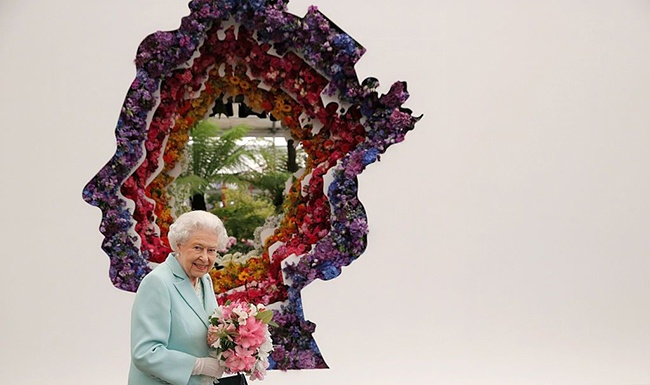 The Queen revealed a darker side to her sense of humor during a visit to the Chelsea Flower Show in 2016. During a discussion with the monarch, herb gardener Jekka McVicar explained how lily of the valley was once used as a poison. "She said, 'I've been given two bunches this week. Perhaps they want me dead'," Jekka told Hello!

10. When she scolded Prince William at Trooping the Colour 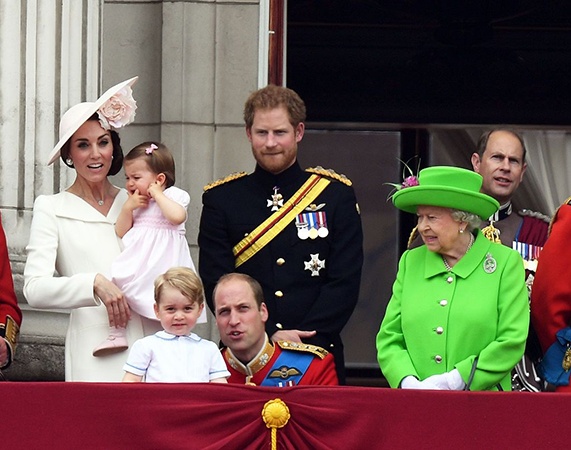 In June 2016, the royal family greeted crowds on the balcony of Buckingham Palace as they always do at Trooping the Colour. But when the Queen looked over and saw Prince William was crouched down speaking to his son Prince George, she was NOT pleased and was caught on camera muttering, "William, stand up!" Of course, William immediately obeyed his grandmother's request, but Prince George has more of a rebellious reaction and slapped his palm to his face. It was brilliant.

11. Whenever she's at the Highland Games 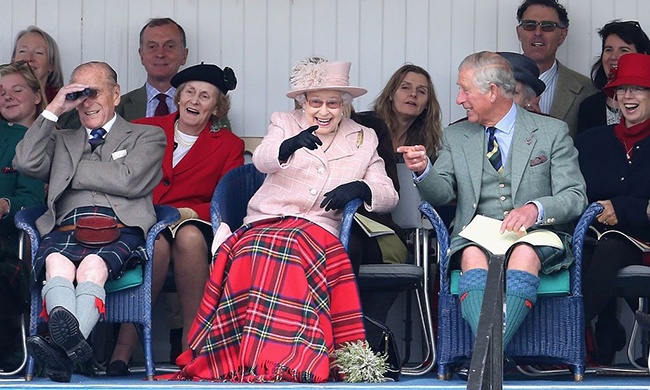 The occasions when the Queen drops her famous reserve are few and far between, but there's one annual event which has left monarch in fits of giggles over the years. The Braemar Gathering, which is held in Aberdeenshire, is enjoyed by the Queen and Prince Philip every September and yep, it looks like a real laugh. The line-up often includes caber tossing, Highland dancing, and the tug of war. Clearly HRH approves.