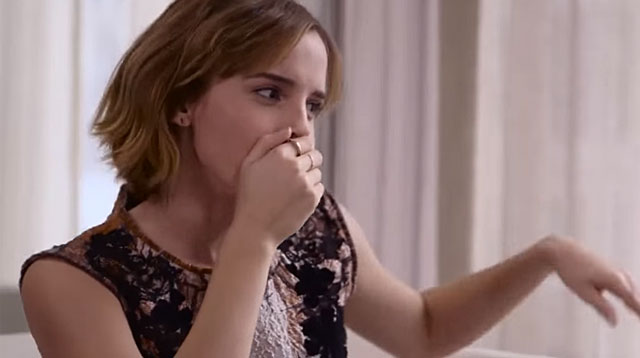 Emma Watson showed off her hip-hop skills in a viral video by beatboxing as Hamilton star Lin-Manuel Miranda spouted a feminist freestyle rap.

The former Harry Potter star and United Nations Women's Global Goodwill Ambassador interviewed the actor/composer as part of the organization's HeForShe Arts Week, which was set up to encourage arts and cultural organizations to get involved in the fight for gender equality.

While the two discussed everything from the importance of female storytellers to the strong women featured in Lin's Grammy-winning musical, they had a little fun when Emma offered to sort America's founding fathers in to the Hogwarts houses from the Harry Potter films.

After a few hesitant false starts, Emma finally gave him a respectable beat, as Lin rapped, "Yo, it's Lin and I have to laugh/how can we not be equal, we're like half/like women are like half of the people on Earth/and yes they should've been cut equal since birth. That means equal pay, all day, every way OK/are we really OK? Holy cow this is such a meme/thank you this is the beatbox dream team."

Emma finished with a flushed red face and exclaimed, "I am so embarrassed right now. I'm literally the color of a tomato. Everyone go see the play and no one ever ask me to beatbox again. These are the lengths I go to for gender equality!"