Zayn Malik's First Solo Performance Will Give You The Chills 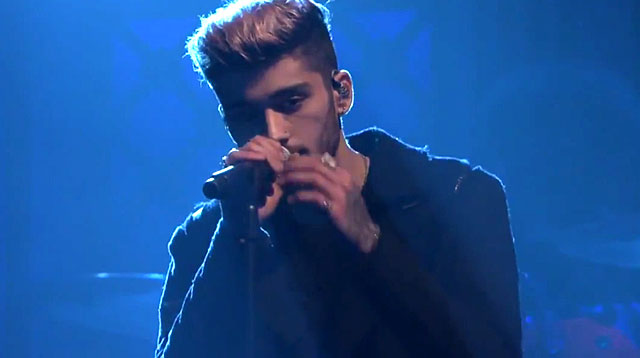 The Tonight Show With Jimmy fallon/NBC

Zayn Malik made his debut solo television appearance on Wednesday night as he performed his upcoming second single “It's You” on The Tonight Show Starring Jimmy Fallon.

Earlier in the show, Jimmy delighted fans by showing off Zayn's new album cover. The incredibly cute cover features a throwback picture of Zayn as a child, smiling into the camera with his hands placed under his chin. This childhood picture is juxtaposed by the fact that toddler Zayn has the singer's current tattoos all over his hands.

Zayn stunned fans when he revealed he was leaving world-famous boyband One Direction in March. However, his solo career is off to an incredible start, when his debut single “Pillowtalk” went in at number one on the Billboard Hot 100 chart—beating One Direction's previous number two positioning in the process.

It seems “It's You” could follow the success of “Pillowtalk,” judging by the audience's reaction to the performance on The Tonight Show.

Sporting new pink highlighted tips in his hair, Zayn wore a black coat for some added drama and gripped the microphone as he crooned the track's lyrics.

Zayn had previously revealed that he had penned “It's You” following his split from his Little Mix fiancee Perrie Edwards.

"I just felt like I needed to put myself out there on that just because it was a form of therapy for me and it did help get me through some s**t," he said during an interview with Zane Lowe on Beats 1 radio.

Mind of Mine is due for release on 25 March, which also marks the one year anniversary of him quitting One Direction.