Is Your Period Delayed? Here’s Everything You Need To Know

Ever had one of those stomach-lurching moments when you’re in the middle of something, just happily minding your own business…and you suddenly realize that you still haven’t gotten your period?

Before you have a full-on panic attack, know that delayed menstruation doesn’t always mean that you’re pregnant (although if it’s pregnancy you’re aiming for, good for you!).

Read on for answers to the burning FAQs many (sexually active) women have agonized over, including what’s causing delayed menstruation, what to do about it, and when you should see your doctor, stat.

It’s been over 28 days since my last period. Should I be worried?

While 28 days is widely considered the standard length of a menstrual cycle, a healthy one can range from 21 to 35 days—it’s normal for your cycle to be a bit shorter or longer than the average, and you don’t have to worry just yet.

It’s been weeks, and still no period. What should I worry about first?

As long as you’re sexually active, the possibility that you have a mini-me in the oven should be your first instinct—even if you’ve been using birth control consistently.

Keep in mind that early pregnancy symptoms are similar to PMS symptoms—gee thanks, biology!—so better take a pregnancy test to make sure you’re in the clear.

I’m not pregnant—I’m sure of it. So why is my period late?

Stress – And we don’t just mean stress at work—any significant stressor such as a serious sickness, a traumatic experience, or the death of a loved one can mess with your hormonal balance by affecting the brain’s hypothalamus, which regulates a lot of the hormones for your menstrual cycle.

Weight issues – Your body mass index (BMI) plays a role in the regularity of your periods, with both underweight and overweight women possibly experiencing fluctuations in their menstrual cycle: Underweight women may skip periods, while obese women may have irregular and heavy cycles.

Too much exercise – Have you been sweating it out too much? Exercise—and the sudden weight loss that comes with it—could be the culprit that messed with your hormone levels in addition to causing physical stress, thereby throwing off your cycle.

Lack of sleep – Women who lack zzz’s are more likely to report irregular menstrual cycles and PMS, which underscores the importance of sleep in maintaining health and well-being. No wonder women struggling with jet lag may suffer from delayed periods.

Just got off the pill that has so far been keeping your cycle running like clockwork? Your body might go a bit bonkers at the change, causing a missed or delayed period.

Medications – Some meds could have an impact on your cycle, including aspirin and ibuprofen. The Mayo Clinic also lists antipsychotics, cancer chemotherapy drugs, antidepressants, blood pressure drugs, and allergy medications as ones that may even halt your period. 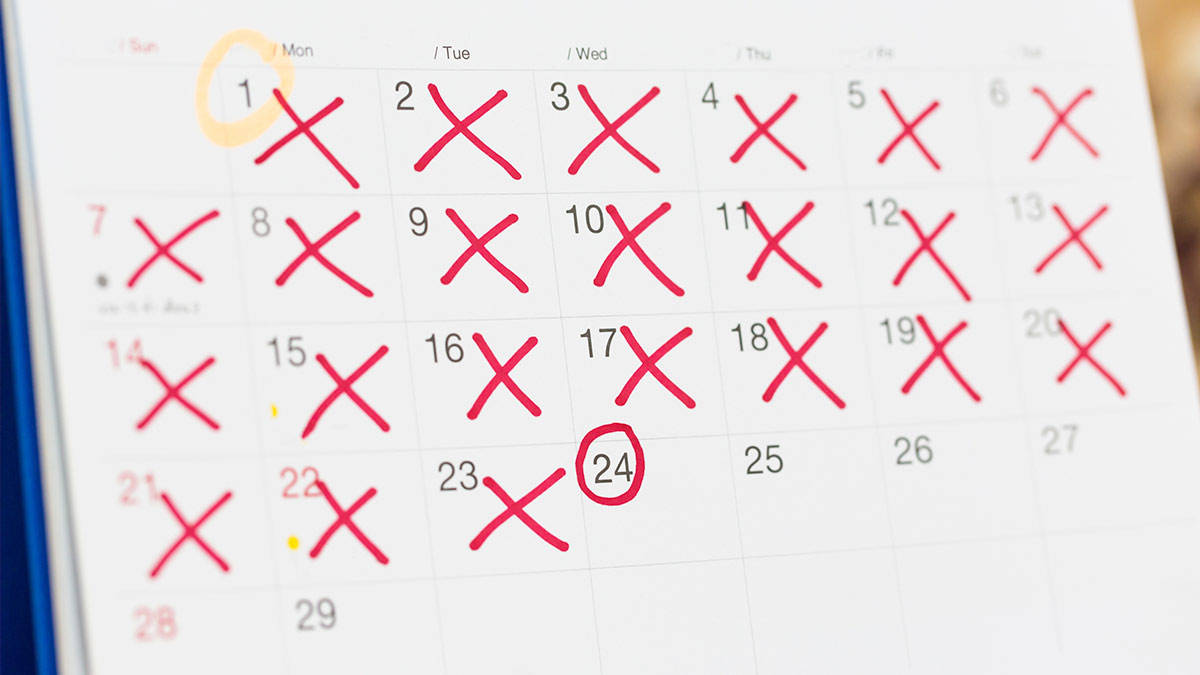 Premature menopause – It’s normal for menstrual cycles to fluctuate when ovulation doesn’t occur: during adolescence when menstruation has just begun, after giving birth and during breastfeeding, and during perimenopause, which signals the transition to menopause. Normally, menopause doesn’t hit until ages 45 to 55, but in rare cases, it occurs before age 40 as premature menopause or premature ovarian failure, causing irregular periods.

An underlying health condition – Diabetes, thyroid disease, and a prolactinoma (a pituitary tumor) are health issues that may lead to late or absent periods. Other conditions these might signal: chronic illnesses such as Lyme and celiac disease, or STDs.

PCOS – Irregular periods, in addition to other symptoms such as painful period cramping and bloating, hair loss on the head, excessive hair growth elsewhere, weight loss, and acne, may point to the hormone disorder Polycystic Ovary Syndrome.

What if it’s been months since I last had my period?

You might have amenorrhoea, which happens when a woman skips her period for months or even years. It can be caused by the same triggers listed above.

There are two types of amenorrhoea: primary amenorrhoea, which is when teenage girls still haven’t had their period by age 16; and secondary amenorrhea, which refers to the skipping of periods for at least six consecutive months despite having had regular periods prior.

When should I see a doctor about my period problems?

What can I do to make my periods more regular?

Depending on the underlying causes, there are lifestyle changes you can adopt to get your wonky cycle back on track.

With stress being not just a common cause of delayed periods but a silent killer all around, women should take care of their physical, mental, and emotional health by easing up on the workload, getting enough rest and exercise, and doing things that make them happy.

For women with weight issues, achieving the target BMI, possibly with the help of a nutritionist or dietitian, can set their cycle on the right track; meanwhile, women who engage in too much exercise can dial down the workouts.

Of course, it goes without saying that you should quit it with the unprotected sex—or double down on the birth control—if you don’t want the anxiety that comes with a late period and all it might imply. Take it from the Spice Girls and be a little bit wiser, baby: Put it on, put it on.