13 Signs You're A Daddy's Girl

1. You believe that every single thing can be fixed by dad. A run down car in the middle of EDSA, a faulty bathroom shower head, a broken lamp—your dad is the best handyman. If he suddenly goes on a solo vacation to, like, Spain, you will be helpless. "DAAAAAD the aircon isn't working. I'm dying dying dying dying come home ohmygod."

2. You probably can't kill a cockroach. I am 25 years old and I have never killed a cockroach in my life. My dad is nearing 60, and he still kills them for me. At 3 a.m. Which is what true love is, basically.

3. He was there for all your big girl firsts. He was never too busy for parent-teacher conferences, class retreats, career talks, your first co-ed party, ballet practice, soccer games in the summer, that time when you played a sheep during your kindergarten play—he never missed any of those. Watching you growing up is The Best Thing Ever, because you are The Best Thing Ever.

4. You're tough. Taekwondo, softball, fencing, basketball, soccer, ballet, jazz dance, gymnastics. You played a billion sports growing up, because his favorite thing in the world was watching his little princess kick ass. Also, he enrolled you in self defense class when you were 10, so you could defend yourself from the Mean People Of The World. Or, boys. Whatever.

5. But even if you didn't play sports growing up, dad's first gift to you was Mace spray. You have one inside your gym bag, one inside your everyday bag, and about ten more at home. You will never run out of stock.

6. He never fails to remind you that you are a child. 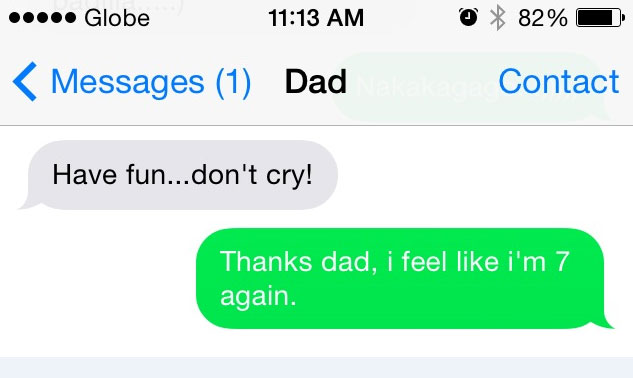 7. He is the first person you text when you have amazing news. "Dad! Dean's List ako!" Or, "Dad! I got promoted at work!" Or, "Dad! Pahinging pera...hehehehe." Even if you don't live with your dad anymore, he is the first to know your life's breaking news. He is always a part of your life, because you want him to be a part of it.

8. Your dad makes the corniest jokes. But you laugh at them anyway. You actually don't know why you're laughing. But his jokes are sooo funny?? Why can't you guys get it?? I think daughters were programmed to laugh at every single thing their fathers say. It's, like, science or something.

9. Your dad loves all your guy friends, but hates your boyfriend. I think dads were also programmed to hate all manliligaws from day 1. It is like when you first introduce a new manliligaw to your dad, he immediately goes on Super Strict Mode, and becomes evil. "That's funny, he's usually so charming and sweet in front of my other friends..."

11. You would never date anyone your dad didn't approve of. You don't get along with papa all the time, but you respect his opinion. Sometimes he'll randomly blurt out things at the dinner table, like, "That guy Mike is bad news. I think he should just be your friend." I don't know what it's called. But dads have this superpower where they can look right through people and immediately know if they are Good or Evil. Science should do a study on why dads know everything. It is creepy.

12. But then admittedly, no guy is ever good enough for you. Mike is too short. Charlie has self-esteem issues. Oh, Adam is gwapo, an owner of a start-up company, runs marathons, and visits the elderly on weekends? Yeah, there's still something off about him. "He has six toes, you can't date him." You will be single foreverrrrrr.

13. You know you can run the world, because you were raised by someone like him. Your dad is awesome. He is a superhero.