3 Couples Get Real About How Money Affects Their Relationships

Money is something you and your partner should definitely discuss.
by Ysa Singson | Mar 14, 2019
Post a Comment
Featured

There are days, more than I would care to admit, when I look at my bank account and wonder, "What the hell happened to all my money?!" And that's just me, a 28-year-old woman flying solo. If you've ever been in a relationship, it can go one of two ways: You can find someone who encourages you to think and plan about the future (read: be as frugal as possible) or you meet someone who's all about enjoying the finer things in life (because every day deserves a treat). I've experienced both types of partners, and each one had its own pros and cons.

We asked three couples to open up and talk about how money comes into play in their respective relationships. Take notes, kids!

How long have you been together? 10 years dating, almost 1 year married

Who earns more between you and your partner?
Ginyn: Right now, I am, while Rozz, who's in between jobs, manages the household and our finances.

What were some of the things you noticed about each other's relationship with money when you first got together?
G: Both of us aren't loaded, so we were both careful and matipid with our money. Our allowances were enough for lunch and commute costs. When we're able to save a bit (or when our parents gave us extra allowances back in college), we'd go on simple dates like merienda and a movie or dinner somewhere. 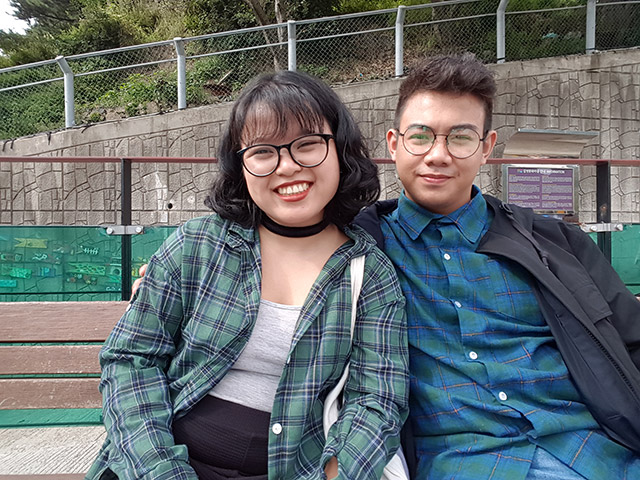 What are your biggest financial responsibilities? How about your partner's?
G: My income gets spent on our monthly bills (credit cards, a loan, and utility bills), our daily needs like food, my transportation costs, and miscellaneous groceries. He's the one who pays most of the bills and tries to budget or find ways to lessen our dues.

How are his or her financial habits similar to and/or different from yours?
G: Unlike me, he's more of the "invest-in-quality" type. While I go for bargains at a tiangge or ukay gems, he prefers brands that are pricey but lasts much longer than a lot of my clothes. On the other hand, he likes buying gadgets like first generation phones and Playstations (I prioritize clothes, hair products, and eventually travel stuff, instead). Both of us spend a lot on food, though, and, as much as possible, we try to make our loved ones feel special through gifts.

Do you fight about money?
G: Not really. We talk about our bills and payment strategies calmly. We do sometimes feel disappointed at ourselves (like when we fail to pay a bill before the due date), but we never argue about it.

How have your financial views changed since you became a couple?
G: At first, we agreed to disagree about the whole cheap clothes vs. investment duds difference. Eventually, I became more mindful of the quality of the clothes and shoes I bought and started having a mix of mid-range and tiangge-priced outfits. No regrets, especially with my investment shoes priced around P2,000 to P5,000, which have been my trusty pair for two or three years and counting now (vs. P300 to P500 shoes that usually last around one year or just a few months with me).

We're also making sure we make the most of our days and enjoy our time together, so we don't really skimp on spending for experiences. Of course, that's not the wisest thing, so we're trying to keep unnecessary expenses to a minimum, too. After getting married, we became more serious about managing our money and saving up, too.

Do you have financial goals as a couple?
G: In general, what's mine is his and vice versa. We'd love to beat our debt and finally save up enough to start a little family this year.

How long have you been together? Four years in June 2019!

Who earns more between you and your partner?
Ginx: Technically, I do. But she has more savings!

What were some of the things you noticed about each other's relationship with money when you first got together?
G: After a few months of being together, I assumed that she had to be really good at budgeting. I didn't know if it was weekly or monthly, but there was definitely some sort of budgeting happening. I noticed that she often had money to spend on drinking or eating out with friends on the weekends, but I also knew that she was her family's breadwinner. Based on her opinions about financial freedom, I had also assumed early on that she had a responsible amount of savings tucked away. This was when we first got together. But throughout the years, I have confirmed a lot of these are totally true, and now I know to what extent these things are. 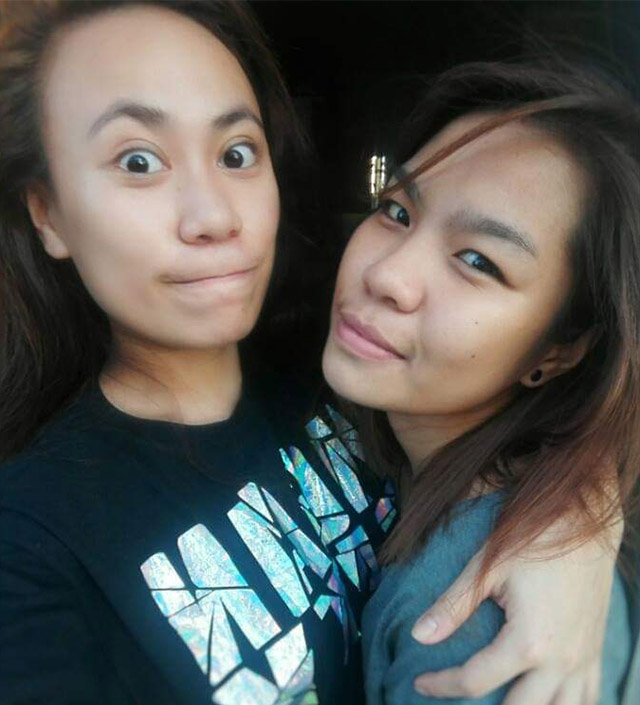 For Leslie, her very first impression was that I had no control. So pretty much the complete opposite of my assumptions of her relationship with money. She says that if I wanted something, I would just buy it, regardless of the price. This was most apparent with food and transportation (because I did not mind Grab-ing or taxi-ing). And I only consciously saved when there was something to save up for (like a trip!).

What are your biggest financial responsibilities? How about your partner's?
G: For me, I'm covering one of the bills at my family's home, and I've got a regular installment for insurance every quarter. Leslie's still sending money to her family in the province. And we both pay rent for the place we're staying at.

How are his or her financial habits similar to and/or different from yours?
G: The things that stand out to me is how Leslie immediately tucks away the money she needs for her bills and her family in her secret hiding place as soon as she gets her salary per cut off. She doesn't use mobile apps at all whereas I prefer to use banking mobile apps for almost everything! She doesn't like having a credit card either (which is why she doesn't have one), but I do.

Do you fight about money often or at all?
G: We don't fight about it, actually! The only time we ever did was when I promised to save x amount of money by x amount of time and I was doing a horrid job at it (i.e. I was not near the target at all a month before my deadline haha). Leslie insists that it wasn't "a real fight" though.

How have your financial views changed since you became a couple?
G: The thing is, I've always been cavalier about money because I have this mindset that money is super easy peasy to earn. I don't really have a big financial responsibility other than myself. Leslie, on the other hand, has been on a breadwinner mindset since she was in college. She knows that she'll be the one their family will end up depending on in case of emergencies, so she's really conscious about being ready for things like that.

I like to think that I've influenced Leslie to set aside more money for herself or for her own future. Meanwhile, I've really acclimated to saving and being more conscious about what I spend on (which Leslie is really proud about!).

Do you have financial goals as a couple?
G: We're currently saving up money for a house. ALSO! We don't want to have a child of our own until we've reached a specific amount in our savings.

How long have you been together? Eight months.

Who earns more between you and your partner?
Chandra: We work in the same BPO company, but since I work full-time and he works part-time, I earn more.

What were some of the things you noticed about each other's relationship with money when you first got together?
Chandra: He didn't want to talk hard numbers with me at first. It wasn't customary in his immediate family to discuss that with outsiders. It took some time to encourage him that, as partners who aim to live together, finances should be discussed in specifics—especially when our budgets merge under one household. 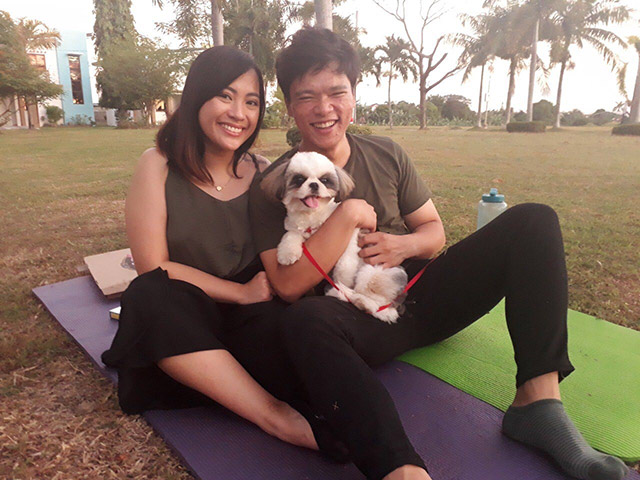 Ryan: I noticed that she didn't have a set budget for expenses per day. She would pay for needs first, but play the rest by ear, and only worked with what was left for savings. Some months she'd save more, other months she'd save less, so it wasn't consistent.

What are your biggest financial responsibilities? How about your partner's?
C: The biggest chunk of my salary goes to rent for a condo I share with my best friend. I'm moving in with Ryan in May so we can both save money. In that same month, I'll also have fully paid for a big loan I took due to a family emergency. So that will be a big relief.

R: Mine goes to rent as well. I'm also taking a few filmmaking classes, and the registration fees can be steep.

How are his or her financial habits similar to and/or different from yours?
C: I like to spend a lot (probably too much!) on beauty treatments, while Ryan's vice is food. I've been building my emergency fund since 2016, and Ryan's just starting, so I'm helping him learn the habit of putting money away. We both grew up in families who struggled financially, and we don't want the same situation for our relationship.

R: We only go on one or two dates a month. Most of our time, we spend at home, which saves us money. Problem is, we love ordering in, and it's cutting too much into our expense budget. When we're tired from work, it's hard to muster up the energy to make meals. We're trying to fight that and cook more.

Do you fight about money often or at all?
C: We've fought about it often, especially as we approach our moving-in date. I've been spending some money on home improvement, and we argued about that because he's concerned he won't have a say on how our apartment looks if most of the items have been bought and decided on by me. But as we've assured each other before, it will be his apartment just as much as it's mine.

How have your financial views changed since you became a couple?
C: I've learned the hard way that there's a difference between giving financial advice and micromanaging. Even when we live together, our finances are still technically separated. I don't have a right to dictate what he does with his money.

R: We're slowly learning to not take our current salary for granted—we used to get by on a lot less, so there's no reason we can't get by now, and have savings to boot. Our lifestyle shouldn't change just because our incomes did.

Do you have financial goals as a couple?
C: We have a long way to go before we're satisfied with our savings, so that's our main concern as of now—saving on rent today so we can have money pooled for a better apartment closer to work (and emergencies, of course) by 2020. I want to get into travel photography, so I'm also putting money away for a good camera. I want to have enough for rainy days, but I want to allow myself to enjoy my money, too.

R: I'm also saving for a camera for filmmaking purposes. But primarily, we both want to have enough put away for when we decide to leave the BPO industry and pursue our passions.