I Had A Stripper For My Bachelorette Party (And I Liked It)!

For my bridal shower, I had one condition for my best friend: I wanted a stripper.

And not just any stripper, mind you. I wanted a foreigner. I’m not a stripper racist or anything, but I have heard horror stories about Filipino strippers (although I'm not generalizing) who just gave zero integrity to the profession. I mean, think sorrowful eyes while making giling, or eating balut so they will feel malakas while they show off their assets (Balut breath? No thank you.). One even spent almost an hour in the bathroom and everyone found out he was just waiting for the Viagra to take effect. How very sexy, right? Way to make a bride-to-be’s night!

So you can imagine why I was adamant about hiring an AFAM.

Despite my best friend’s violent reactions, she delivered, and got me my very first stripper, Mike.

I have to admit, Mike was like a Cosmo Bachelor. He was French and fabulous, with a buzz cut, legit abs, and a sense of humor to boot. He entered our room in a white button-down and black slacks a la Christian Grey—a request I also made (Yes, I knew what I wanted, so sue me).

“I heard yooo were a vehhhhry bad girrrrl, e?” he told me, while setting up his portable speakers and music (Yes, he came prepared—with props!). I was surrounded by my bridesmaids and friends, while I sat on a chair in the middle of a room in a hotel I prefer not to disclose, since the management probably didn’t know they had a stripper in Room 1521.

There was no time for foreplay: he immediately took his shirt and slacks off and straddled me in his tight black brief, and I was left in a fit of giggles, because
for a stripper virgin, this was
all so surreal.

He tried to remove my hair tie, but I said no, so he resorted to just pinching my cheeks and saying how cute I was, LOL.

He smelled good. No balut breath or B.O., thank you very much. He had one rule: hands off your lap, because you’ll accidentally hit his balls when he sits down. So with my hands behind my back, I let him do his thing—which involved carrying me (Damn it, why did I wear a pencil skirt?!) like I weighed 2 pounds. The best thing about Mike is he involved everyone—and the bride (That’s me!) had free reign to select the next friend to be given a happy dance.

After considerable gyrating, Mike hosted three games: the first involved finding stickers on his body while three of us were blindfolded (he made orgasmic sounds while you pulled them off), the second was a dare for me to imitate a sexy number for him as demonstrated by a friend, and the third was to eat marshmallows and whipped cream off his body (He had the decency to take a shower right before this activity—how sweet!). 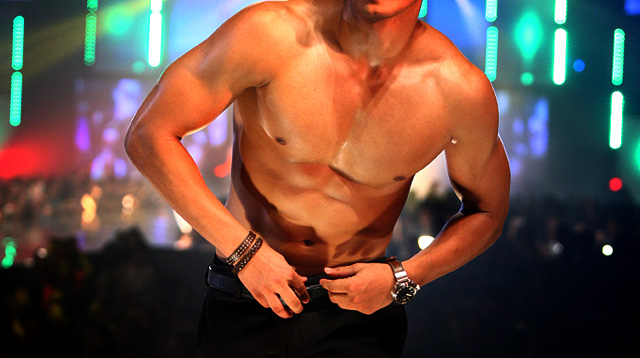 He took a particular liking to my friend, and kept on saying “She is very naaaau-ghty and bas-toos!” Of course we never let her hear the end of it.

Mike and I chatted a bit after the “event.” As it turns out, he had a day job (so no photos were allowed), and December and January were “incredibly tiring” months, because he was “so in demand.” Poor guy. Actually, I take that back. This guy is rich from all the stripping moolah gets.

My best friend later told me that Mike was booked via manilasecrets.com, where you can select your stripper of choice and the level of intensity you want. Mine was the second to the highest, called “Crazy Crowd.” The description? “Don’t tell our moms!”

Mike even wished me a “very happy marriage” before he left! He’s a cool guy, although I would NEVER want to see him again, because #awkward.

So there goes my first stripper experience. It was ~*amazing*~ and unforgettable and fifty shades of ~*kinky*~ in all the right places. And to those too shy to ask: 1) He kept his underwear on, although he was very generous with his butt crack; 2) He had a boyzilian; 3) No erections were involved, although he had a perfectly shaped ~*bulge*~.

I have to say, though: the first thing I wanted to do after was to get back to my fiance.

Also, to take a shower.